Before you get bogged down in complicated indicators and trading "systems," you need to know how the market works on the most basic level.

Because if you don't understand the "guts" of the market, you will be at a serious disadvantage in your trading and investing.

It will also show you the limits of technical analysis, so you don't look for some "holy grail" and end up blowing out your account.

Let's first take a look at a dead stuffed squirrel.

eBay is a glorious place where you can find deals on stuff you want, but also discover how hilariously messed up humanity really is.

For example, here is an item for sale, it's title is "Squirrel Mount ( cowboy flashing his nuts ) Taxidermy Red Squirrel" 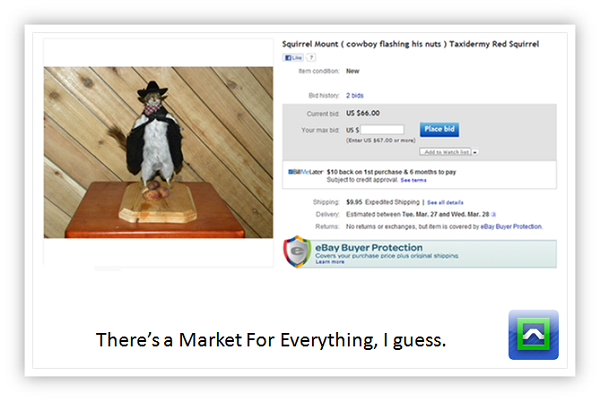 Aside from the absurdity of a stuffed squirrel mount, is the fact that there are active buyers.

There are at least two people willing to pay more than $60 for this.

But we know that at some point, prices will auction high enough for some of the buyers to drop off. Eventually it will taper off to what at least one buyer considers a "fair" price.

This is an example of a one-way auction market. Price is dictated by the buyers of the "asset," and price will never go down as pulling your bid is against the rules.

No matter what is up for auction, we can develop a model that all one-way auctions will follow: 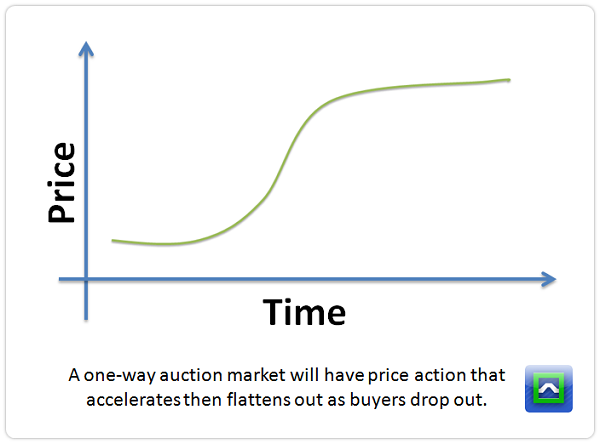 All one-way auctions will follow this price action unless two things happen:

Now let's consider for a moment that this isn't a super rare dead stuffed squrrel, but in fact is one of millions created by now defunct startup (it was a Facebook for squirrels). Instead of being a one of a kind piece, it's now one of many, and is now a commodity.

In other words there are many more sellers available in the market, so it can't be a one-way auction.

Moving on from this terrible dead squirrel analogy, let's consider the stock market.

A company raises capital from the public markets to finance operations and grow their business. In exchange for giving up their capital, investors expect the company to grow in value or at least issue a dividend.

Sometimes an investor will want to divest shares, which can be done on a secondary stock exchange. That's what we call a stock market. 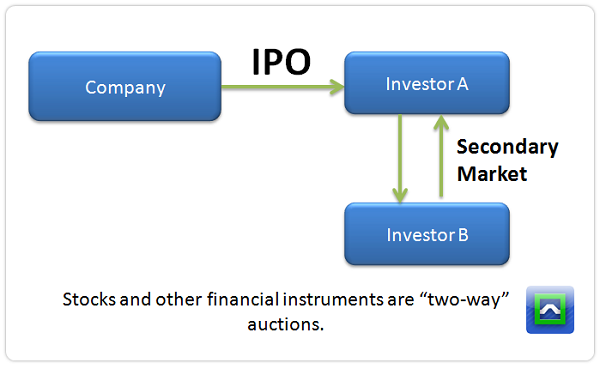 Since there are participants on both sides -- buyers and sellers, different dynamics come into play compared to the one-way "ebay" model.

But the overall premise is the same.

Just like in a one-way auction, price can move higher until buyers run out.

But since we have more than one seller, we can see price go lower due to more sellers than buyers.

In this kind of market, prices "auction" both higher and lower until we find value areas in which either buyers or sellers respond in kind. 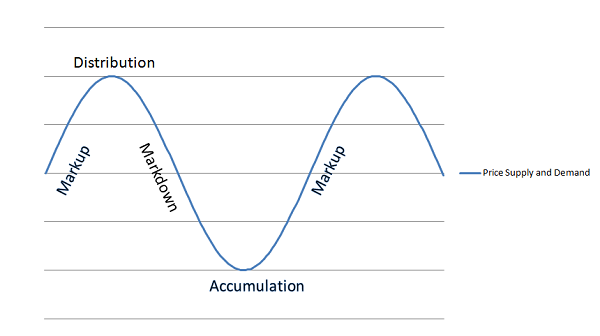 This forms the basis for market cycle theory.

Of course, stock price dynamics are much more complex than an ebay auction-- but they have similarities.

Just like a one-way auction, the price of the asset will follow a market cycle unless market participants change, or if the perception of value changes. And these two things happen-- a lot.

And if you can figure out price levels that bring in different participants, or if the value changes, that's where you make money with technical analysis.

Here are some other takeaways to consider:

1. Prices move based on the perception of value by market participants, not what you think. You may not have a liking for dead stuffed squirrels, but that doesn't stop people from buying them. Similarly, you may not like a company or think a stock has sold off too much, but it doesn't matter. It's about what the total collection of market participants think.

2. Just like an ebay auction with an expiration date, time plays a factor due to the opportunity cost of not getting returns and sitting in cash. This plays a huge part in modern portfolio theory and often dictates the actions of large market movers.

3. It's the participants at the margins that really dictate what is fair value of a stock. If a stock is trading at 50, it really doesn't matter if there are willing buyers at 45 because they won't move price action. This is where tape reading comes into play.