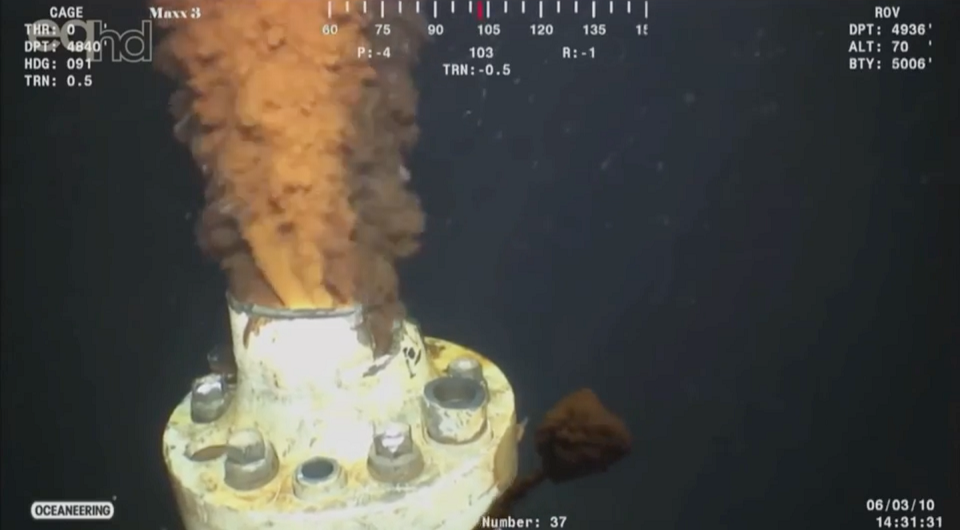 This was the live feed that was slapped on our TV every night.

The first part of the tragedy -- where men died in a fire -- was now just a memory. We couldn't figure how much oil was gushing out from the pipe, but when it was all over about 200 million gallons went into the Gulf of Mexico.

During the Deepwater Horizon spill, nobody had a single clue on how to fix it. During government press conferences, they talked about filling up the hole with cement and golf balls.

We joked we were going to nuke it.

Dealing With The Aftermath

Eventually the well was sealed, and then we had to deal with the aftermath.

We didn't know if the beaches would ever be OK again. We thought tourism was going to die on the gulf coast. We thought we would get sick and would have to permanently move.

All levels of government were unprepared for this. To clean the oil, farmers were shipping hay and barbers were delivering bags of hair to get the oil out of water.

Eventually we moved on. It was far worse than our initial estimates, and it was far better than what we expected at the end. New regulations were put in place, the State of Florida is now completely against offshore drilling, and the Gulf of Mexico still has emerald green waters and white sandy beaches.

How Markets Move On Narratives

Within any market correction is a story to tell.

While price action during each event is different, there is a simple framework that each of these follow...

Credit to Donald Rumsfield for the phrasing...

When a correction starts, a risk comes out of left field. Something the market wasn't pricing in... usually something messy that analysts can't easily plug in to their spreadsheets.

At some point, the market becomes fully saturated and "anchors" onto that uncertainty narrative. It's all financial media talks about, and stock price movement becomes based on headlines.

Once the "well is plugged," there tends to be an aftermath period to see how much the event will affect stock prices in the long term. Once the risk is fully priced in, stocks will move up again.

The Narrative Cycle During the BP Oil Spill

On April 20th, 2010, Deepwater horizon exploded. The two companies most involved, BP and RIG, didn't see their stocks react to the news. Oil platform "issues" happen all the time.

Then we get the live video feed of oil being spilled into the ocean. That's the first volatility pivot.

The next few months were a solid trend down, punctuated with sharp rallies anytime there was hope of a fix.

Anytime the attempt to plug the well failed, the stock would tank further.

The well was capped on the 15th of July, when the stock was significantly off its lows... the "fix" had already become priced in. The price of the stock had overshot the risk involved in environmental lawsuits and payouts, and a within a few months the stock had retraced over half of its losses.

2020 had the fastest 10% correction in the history of modern markets. In under a month it took out a 20% drop, allowing financial media to officially call it a bear market.

I've thought about the best analogy to consider when watching this price action.

We can't compare it to the Oct 2014 pullback with Ebola because the economic effects are different... China shut down industry to get ahead of this.

And it's nothing like the financial crisis of 2008, because there was a "long bleed" in economic data before reality set in and banks started to fail.

This pullback is a global "Deepwater Horizon" event.

COVID started showing up at the beginning of the year, but we continued making new all time highs. Then China shut down Wuhan and everyone paid attention.

The cynical thing is-- the market doesn't care about people dying. It cares about companies being able to sell things to people... and when companies can't make those things then that becomes a risk.

As it spread, new "Unknown Unknowns" started moving to the "Known Unknowns" narrative. When that happens, it introduces new volatility into the market.

Having the House of Saud break the oil market and causing a gap down in crude didn't help either.

All levels of government have been horribly inept at responding to this crisis. Some actions are understandable, and some border on malfeasance.

Yet at some point the "well will be plugged." Either by the mathematics of infection or government brute force, COVID-19 will no longer seem an existential risk to Western Capitalism.

The market will bottom before that happens as relief gets quickly priced into stocks. Then the analysts will start plugging in new numbers to their risk models, and we will transition from a "known unknown" to a "known known." The countertrend rally will be massive.

Darkest Before The Dawn... Or The Sun Just Burned Out

Including this one, there have been 3 bear markets in stocks since the Financial Crisis. Anyone that says there has not been one is either lying or isn't directly involved in the markets with actual risk on the table.

Corrections and bear markets always feel terrible. At some point it stops being numbers on a screen and you start to think about the real world consequences.

As I'm writing this, the NBA just cancelled their entire season. All flights from the US and Europe are postponed for 30 days. Nobody knows the true numbers of infected in the US, and we probably won't until infection rates have peaked.

And when we are fully certain of all the numbers and risks involved, the market will have bottomed a month ago.