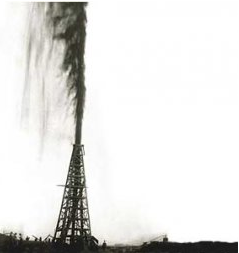 That could have been the easiest "indicator" telling us that the oil market was running hot.

Starting in 2010, new oil exploration and extraction tech started to come into play. Oil shale fields that, once dormant, were now a massive source of oil wealth through fracking.

With the Bakken oil fields coming online, there was a massive move into these small towns in North Dakota. Oil workers chasing six-figure salaries went north.

And so did the rest of the "support staff."

New apartments built...
Restaurants broke ground...
And strip clubs popped up all over the place.

Crude Oil traded from 110 per barrel all the way down to 50.

Turns out, having a massive increase in supply causes prices to go lower. Who knew.

Since then... oil stocks have undergone a multi-year bear market with underperformance, culminating in an outright collapse at the end of 2015.

Here's a chart of XLE, the SPDR Energy Sector ETF:

So far, that $50 level seems to be the bottom for this market.

Yet, for all of 2017, energy stocks have significantly underperformed the market.

After the breakout from its downtrend in August, sellers came and slammed the energy sector back to new lows.

And then the rubber band snapped back.

This is the strongest rally that energy stocks have seen this entire year.

Here's a look at the 10 day IWO Turning Point Indicator:

Over the past 10 days, XLE has rallied over 6%. This is the strongest move all year, and to me it's signalling that buyers are willing to rotate back into this sector headed into the fourth quarter of this year.

As it stands right now, I think XLE and some select energy stocks are due for a fade... but scaling in will definitely help as I'm probably early on this call.

If and when the pullback comes, start looking for some bull put spreads to collect some income. And if the energy market goes sideways for a while without sellers stepping in aggressively... then some calls 3-6 months out in time will provide some nice profits.

I've already sent trade alerts on a trade in XLE, with the potential to earn 20-30% returns in a short time, while keeping risk low. If you'd like to get my exact trade alerts, start your trial to IWO Premium today.