Let's face it, the past month has been boring for stocks.

The S&P 500 has been stuck in a super tight range, and while there hasn't been much movement on the surface, a few select areas have been undergoing rotation.

With bank earnings out of the way, we're starting to see volatility pick up a little bit.

In the next few minutes, I'll show you a setup on a bank stock that could potentially lead to easy profits.

Let's take a look at the whole space first.

If there is one sector that the election helped, it was the big banks. 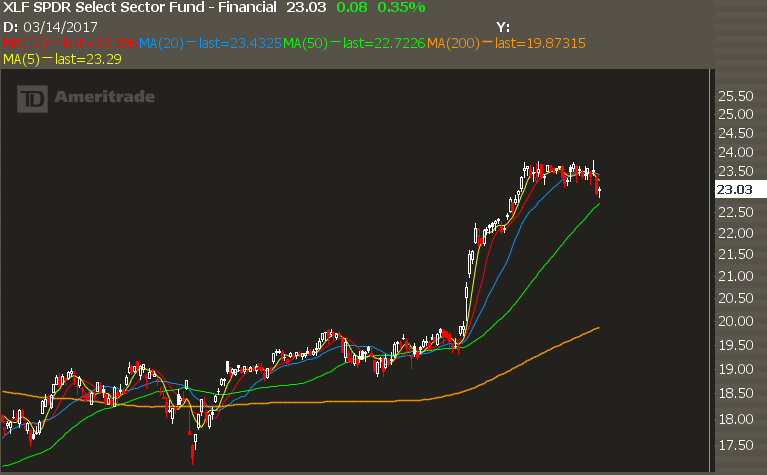 After the elction results, the sector went straight up... and after resting for about two weeks, the sector continued to run in anticipation of a Fed rate hike.

Here's some statistical analysis of how the sector traded: 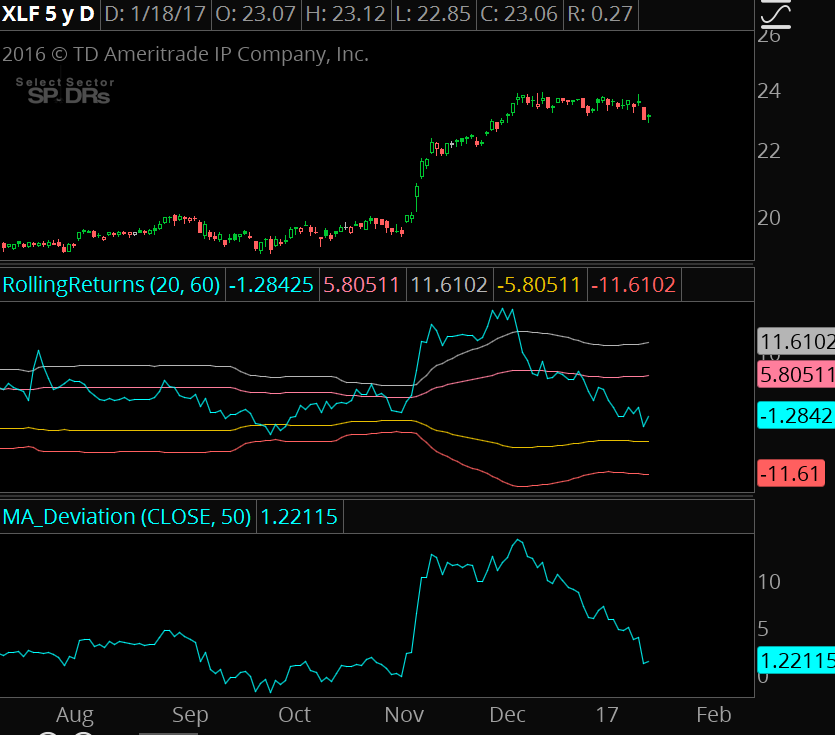 In a one month window, XLF had rallied over 15%. And at one point, the sector ended up 14% above it's 50 day moving average.

To put that in context... that's the largest overbought reading we've seen in over 5 years.

Clearly the sector was pricing in perfection... investors are expecting the repeal of Dodd-Frank, and the Fed hiking rates led even more investors to pile into financials.

What Happens When Perfection is Priced In

Now a funny thing happened after the rate hike... the sector didn't move.

This is a great example of how a stock or market can run in anticipation of an event, but after the event happens it's already priced in. It's what we used to profitably trade TLT into the Fed meeting.

Now we have some news that is causing the sector move again. Bank earnings are out on some key names - JPM, GS, BAC, MS and others.

So far, the reaction seems to be muted.

On some names, the stocks are selling off as investors are taking profits... there's probably an air of disappointment as the stocks didn't continue to run higher after the event.

I think that disappointment will build on itself as late buyers of tehse stocks get stopped out, and anyone that does want to re-buy is going to be a little spooked with some selling.

Now is Not The Time to Get Bearish

I don't think that getting aggressively short these names is a good bet.

Remember, when stocks get overbought, there are three ways they can correct.

We've already seen a time-based correction in financials. And once the initial shakeout is done, buyers will step in quickly to scoop up shares.

So now is the time to start planning the levels where you want to buy the dip.

Let's look at one of my favorite stocks to trade- Goldman. 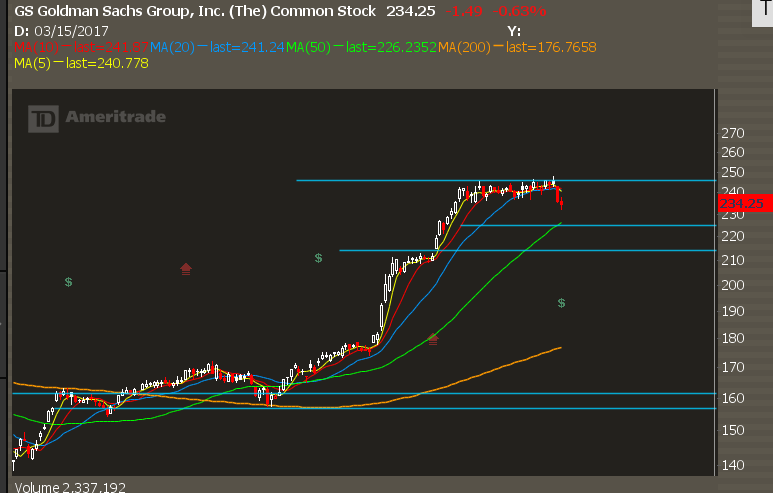 After an incredible rally from 160 to 240, the stock has gone sideways for well over a month. Earnings are out and the stock is now in control of the sellers.

There are two major levels to watch. The first is the rising 50 day moving average, currently sitting at 225.

The second is the pivot level from the most recent breakout right around 215. Those are the two levels where we have a high odds of buyers coming back into play.

How to Profitably Trade a Pullback

With this kind of setup, it's best to look at where the market won't go rather than trying to nail the exact bottom.

This is where bull put spreads come into play.

The current price for this spread is sitting at 0.62, but if the stock breaks under 230, then the value will be going for 0.80.

If you want to be a Proactive Trader, you can simply place a GTC LMT order at 0.80. You know that's a good risk/reward area... you can place the entry and simply walk away.

No need to stare at the charts for 6 hours a day. No need to be glued to your smartphone waiting to execute on the trade.

This trade makes money if GS goes higher, or if it continues to stay within a tight range.

There's one more step to consider to make sure you really nail the trade:

Here's the thing about buying pullbacks... there's no true way for you to know that you'll nail the exact bottom.

I see this a lot in new traders. They go "all in" at a level that they believe with all their heart will hold.

And then it doesn't.

And they lose money, and feel bad... maybe stop out only to see the market reverse in their favor, or hold for much longer than planned.

It can be really frustrating to watch.

A simple fix is to scale in to your spread trades.

That way if the stock continues to move down, you're prepared to add to the trade at better prices.

So successfully sell option spreads, you need to be Proactive.

Pick your levels.
Price your spreads.
Use limit orders.
Scale in.
Scale out.

That's the recipe for success.

If you'd like to have trades like this "done for you," then click here to read more about how to earn consistent profits in the options market.