Today I want to reveal to you one of the best looking technical setups in the market right now.

But first, let's talk some football.

Over the past month, there has been so many amazing college football games on TV. The Rose Bowl was an instant classic. Both Alabama and Clemson put on defensive performances that were a work of art. It's been a fun ride.

Over the past few years, cord-cutters have continued to end their subscriptions.

Plain and simple... some people just don't like to watch live sports.

Instead, they binge watch shows on Amazon and Netflix.

The most recent show on Netflix that is getting a ton of attention is "The OA." Now I watched it, and it definitely wasn't for me but it's good enough to get a second season.

Here's the crazy thing-- Netflix spent about $6 billion on original shows in 2016, and they plan to ramp up spending even more into this year.

And it appears to be working... let's have a look at a weekly chart of the stock.

After having some trouble back in 2012, the stock bottomed out and has been in a slow and steady uptrend ever since. In early 2015 the stock topped out... right after the stock split. Since then it has een in a range between about 90 and 130 for basically two years.

Recently, the stock had a massive move on earnings and has been consolidating just underneath recent resistance. We can call this a cup and handle pattern. 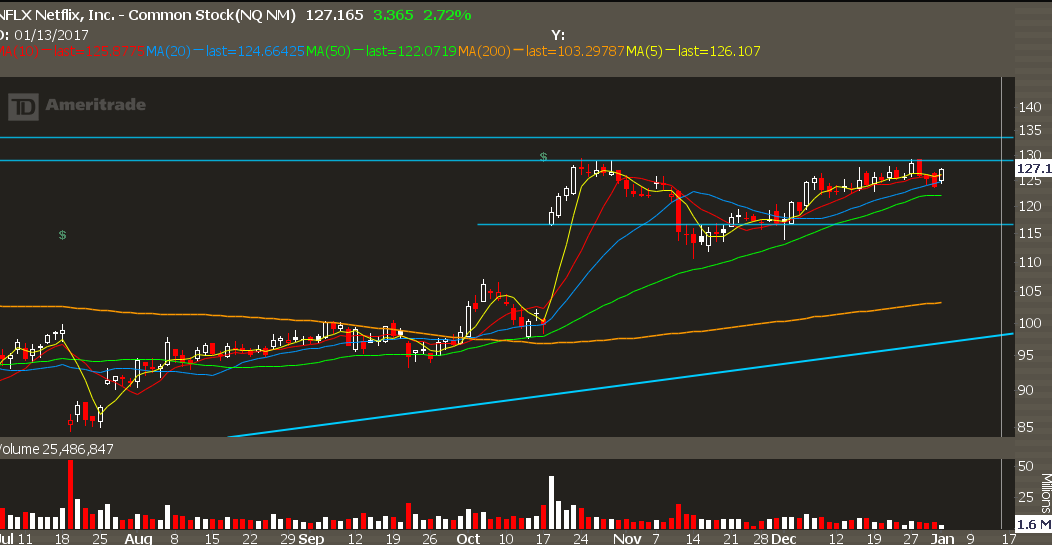 On the previous earnings report the stock had a massive gap higher and then a few more days of momentum into resistance.

Since then, the stock has been in a pop drop and chop pattern, where the stock popped on earnings, dropped as momentum waned, and then has chopped around this entire time.

Here's how I think this stock will play out...

When a stock has this pattern, many times it will drift higher into its next earnings event. Basically, anyone that bought before the previous earnings is in a position of strength and is willing to hold the stock through the next earnings.

This is called a pre-earnings run.

Now combine that with the fact that we have a 2-year long resistance level right at 130. If the stock manages to break above that, then the momentum players will pile back in as it breaks to new all-time highs.

The positive feedback loop will build on itself.

My initial target for the stock is 140, and I think that into this year... if the breakout holds... it will be one of the more healthy trends in the market.

With our new service Proactive Spreads, we alerted clients to this pattern and constructed an anticipatory trade using bull put spreads. We expect this and many of our other trades to be cash-flow winners over the next year.

Want to see how Proactive Spreads can make you consistent profits? See our secret sauce and sign up here.