EVERYBODY GET YOUR HATS! 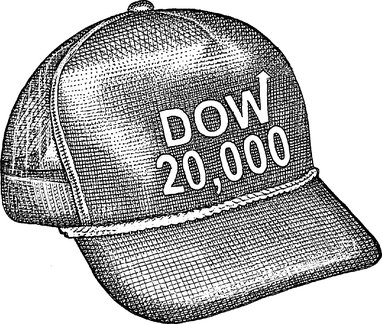 The Dow Jones Industrial Average is just spitting distance away from a nice, round, whole number.

After all, the index is just a handful of stocks picked by a group of people in a conference room.

It shouldn't really matter to the markets, right?

It Matters Because it Matters

There's this concept in the markets called reflexivity.

If a stock is rallying, then it gets more attention, more people want to work with them, the company gets more sales, the fundamentals improve, and the stock continues to rally.

Basically, the perception of a stock or market can affect the company.

Now I'm sure you'll have some college professors out there tell you that the market is efficient and how we're all rational actors.

Yet savvy traders like you and I know better.

We're just a bunch of hairless apes that can't tell the difference between a sabertooth tiger and a 1% drop in the markets.

Well, the market is simply a collective opinion... on lots of things.

One of those things can be a price level. Like Dow 20k.

Or a "golden cross."

Or the "Hindenburg Omen."

If you get enough people to accept the narrative, then it starts to matter.

You may not like this idea... but that's just the reality of what we have to work with.

A great example is something called the $100 roll.

If a stock is trading in the 90 dollar range for the first time, it has a high odds of touching $100.

So think about this magical level in the Dow.

The media is obsessed about it. It's starting to leak into "mom and pop" local news.

Now think about it... what happens if we clear 20k?

We get the headlines. Everywhere.

And maybe investors who aren't fully loaded on stocks, they start to think about it some more. It may not happen consciously, but you know the lizard brain is working overtime on the "fear of missing out."

So those investors call their brokers and chew them out about having them overweight in bonds when they've sold off 10% and the market's rallied 10%.

And those brokers rebalance those assets, adding fuel to the fire.

Again, it's not guaranteed that we'd see a momentum continuation, but it's possible. That's how psychological reflexivity works.

This is kind of where it gets tricky...

See, because the D0w 20k level is so obvious, then the story may flip. Where the smart money doesn't sell until we approach 20k and then looks to offload into that level.

A narrative can get so strong that it feedsback on itself and isn't a "sure thing" as you think. Sometimes there's a difference depending on how much energy has been spent on a strong rally or selloff.

But you basically get into a bunch of systems where some investors try to front run obvious levels, and others try to chase it after the fact.

Either way, it matters. You may not get a distinct edge at these obvious levels... but there is a way to profitably play it.

How To Trade It

What I've found is that trying to trade obvious levels when they happen is not going to be your best bet.

Many times, these levels can act as a magnet.

Think about some of the "obvious" levels.

You can construct trading systems that use these levels as magnets.

For example, if a stock had a big gap up into earnings and then pulls back... odds are that earnings reaction high will act as a magnet. If enough time goes by it becomes a good risk/reward trade:

Or if you have another stock that has been overbought for a while, odds are it will continue to slide into a major moving average... so you can either try to short it into that level, or anticipate the support level:

This is an amazing approach to the market. Using behavioral finance and psychological reflexivity to get a sustainable edge in the markets.

Combine that with a little quantitative analysis and a great option trading system... and you've got a way to be consistently profitable over the long term.

If you want to see how I've combined all of this into an easy-to-follow trading service, click here to learn about Proactive Spreads.