The last Federal Reserve meeting of the year.

And after all the drama we've seen in 2016, this event seems to be approaching without a whole lot of protest from investors.

According to the Fed Fund Futures market, the odds are currently set at 95% that a rate hike will happen.

If I had told you that 6 months ago, you'd think the market would be selling off as investors throw yet another tantrum over a rate hike.

And the treasury market has sold off pretty aggressively into the event.

Taking a Look At TLT 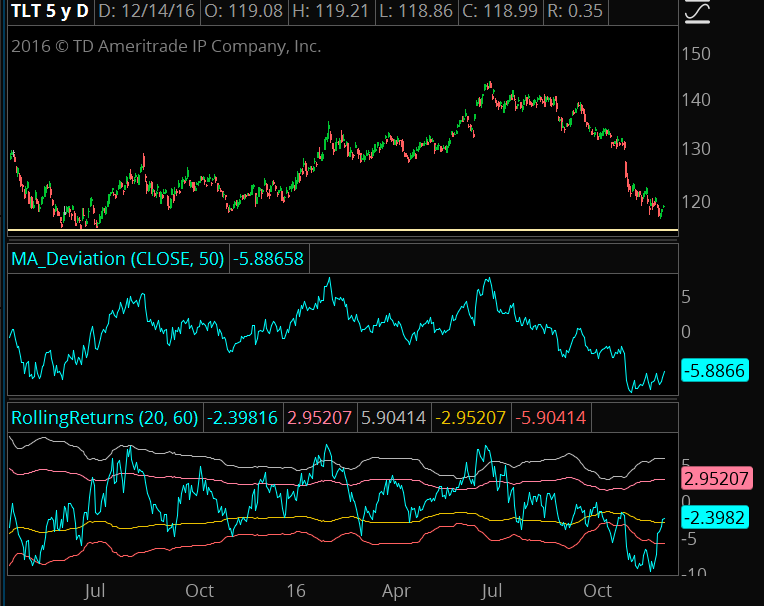 This is a chart of TLT, which is an exchange traded fund for long Treasuries.

When TLT goes down, it means rates are going up. You may need to stand on your head to figure out how bonds work, but that's the general idea.

Now TLT is coming into levels that we haven't seen since July.

Some might call this a support level... at least I am.

On top of all that, there has been incredibly strong selling momentum.

Over a one month period, TLT had sold off over 9%. And it was 5% lower than its 50 day moving average.

Well... what happens when TLT gets that oversold? Let's take a look.

What Are The Odds? 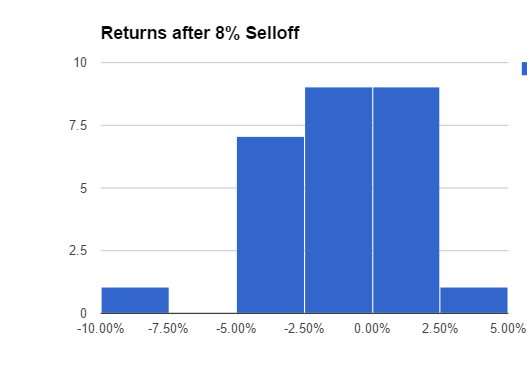 This chart shows us the 1 month returns after TLT has sold off more than 8%. As you can see from the total number of instances... it doesn't happen very often.

Other than one major selloff of 9%, the downside risk does seem to be muted. There does seem to be a slightly further negative bias, but most of the results are above the -5% mark.

Couple that with the clear technical support coming into play, and the momentum divergence that we've seen on shorter term charts, and it looks like good risk/reward to get on the long side of TLT.

Yet, we can't forget the Fed. This is the main catalyst that investors have been anticipating for over a month now.

When you see strong price movement into an event, often times the event has been "priced in" to the market. We see this a lot when a stock rallies hard into earnings and then doesn't move much after earnings.

It's where we get the phrase "buy the rumor, sell the news."

I think it's a high-odds bet here that as we head into support on TLT and how many sellers already came in... that it's a better bet to look for a lack of downside.

The Trade To Take

A simple bet here is to sell put credit spreads in TLT.

You'll get long exposure to TLT, and an added advantage of an elevated implied volatility environment. 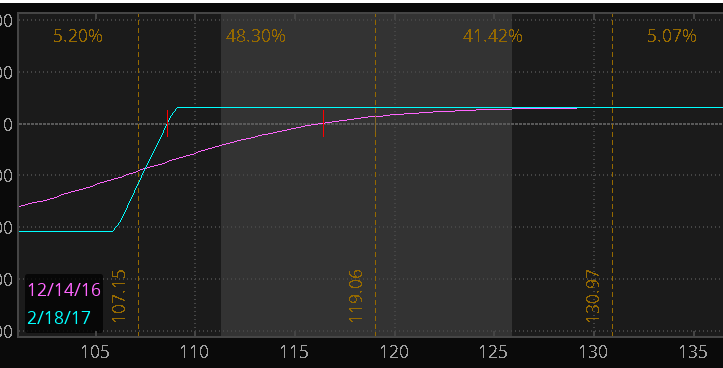 When I trade credit spreads, I combine analysis on both traditional technical analysis as well as my own quantitative models... but that's not where I get my edge.

Want to find out how to get your edge?

Click here to see how to become more consistent and how I can help you with your credit spread trading.