This "call" may seem a little late, but in the context of the range we've been in, this current move could just simply be a blip. 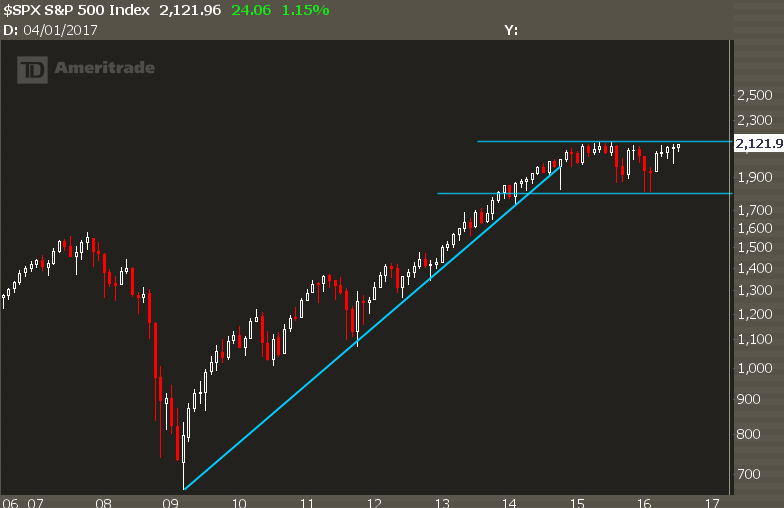 Given the current situation, we have been in a cyclical bear market in the context of a secular bull market.

You  may ask yourself...

Markets can correct through three ways: price, time, and momentum.

For two years, US stocks have been in a sideways corrective pattern with plenty of shakeouts.

Now let's put in the past two years in the context of a few global macro events: 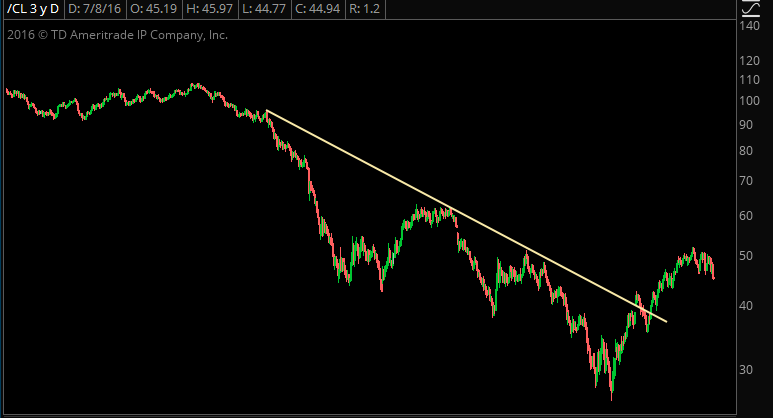 Too much leverage and too much supply led to a structural collapse in oil. Over the course of two years, oil ran from 110 to 30... basically a 70% drop in prices. 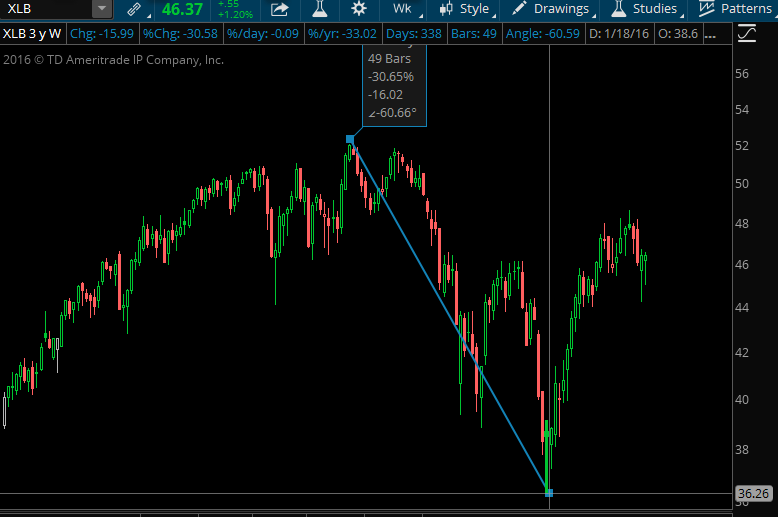 What happens if we look across the pond?

A look at EEM (Emerging Markets ETF) shows how much damage was done over the past few years: 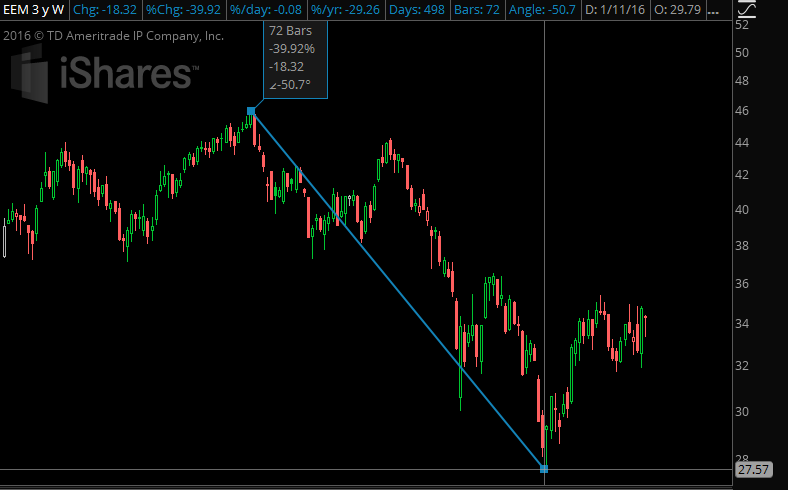 Similar instances can be found across the globe.

If you've been waiting for a bear market... you missed out. There were and have been plenty of established and mature bear markets and it's possible that those cycles are over. 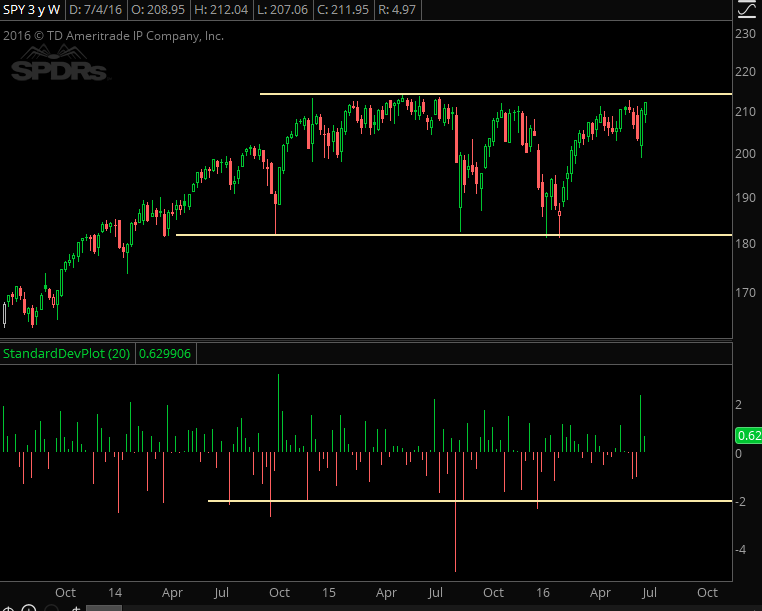 This is a weekly chart of the S&P 500. The lower study is a standard deviation plot, which shows us how big the week's move was in relation to the past half year's volatility.

We have seen 3 major volatility events over the past two years: the ebola crisis, the China currency crash, and the risk rotation at the beginning of the year.

Three major shakeouts. If investors were scared for any reason whatsoever, they've had plenty of opportunities to sell their stocks.

In fact, that's what we've seen. Equity fund outflows have been negative for basically the entire year.

US Treasuries Have Gone Parabolic 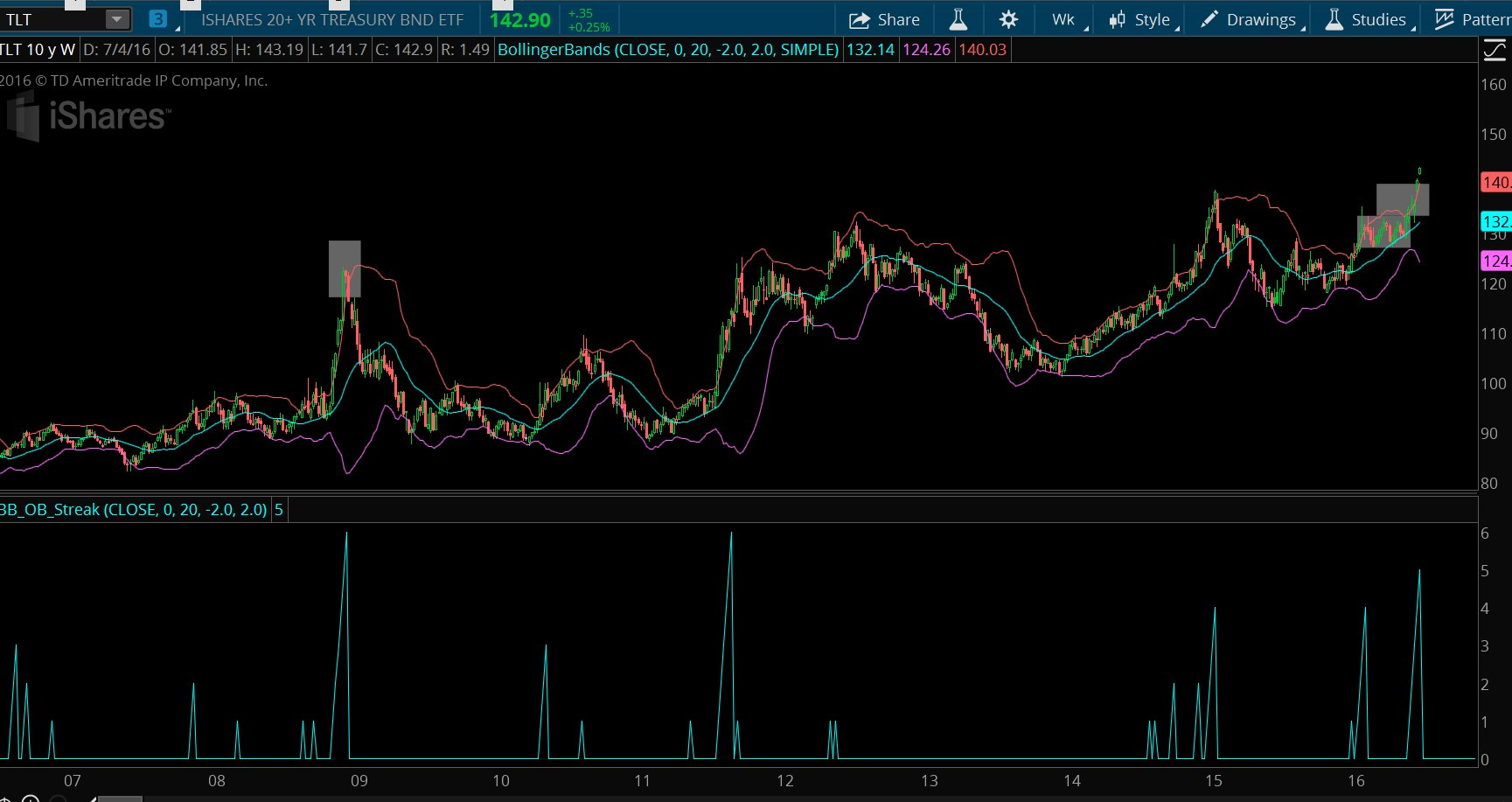 This is a weekly chart of TLT, an etf that tracks long duration US Treasuries.

The lower study shows us how many weeks in a row that we have seen the etf overbought.

As it stands right now we have had 5 consecutive weeks above the weekly upper bollinger band.

That has happened only 2 other times since 2008.

In fact, for the first tie since the market crash in 2008, the S&P 500 dividend yield is now higher than the 30 year treasury yield.

The reason for this move is pretty simple.

30% of all sovereign debt now have negative yields. That means you have to pay their governments to own their debt. This doesn't make sense to me, but it is what it is.

So we've seen capital flight back into US Treasuries as it is the best yielding instrument right now.

Let's put this all together.

Over the past two years, we've seen a Brexit, a Chinese currency crisis, an oil shock, and a biological outbreak scare.

During this time, oil stocks got cut in half, emerging markets were down over 30%, the BRIC countries are getting slammed, and European stocks also got nailed.

There was also a crash in the British Pound to levels not seen since 1985, and the Swiss Franc had something like a 20 standard deviation move.

Oh and one more thing: the Fed stops their Quantitative Easing at the end of 2014.

Now think about this...

If I came to you back at the end of 2013 and told you all of this would happen in the next two years, where would you put the price of the S&P 500, the Nasdaq, and the Dow Jones Industrial average?

You'd say we'd already be off 20% along with the rest of the global macro landscape.

What we are seeing here is an "in spite of" trade setup.

The S&P 500 is about to hit all time highs in spite of all that has gone on.

The US Markets have "zagged" while everthing else "zigged."

Absence of a trading signal is just as important as the obvious one.

Think very carefully about how you want to position yourself headed into the Fall of this year.

I'm a believer that knowing the big picture will help you better frame your trading decisions in the short term.

Yet there is a problem...

You can end up getting lost in the wash.

Too many headlines, too many talking heads, too much noise.

That's why it's absolutely critical that you follow price action instead of the headlines.

Because if you'd listened to everyone else over the past two years, then you're probably one of those people that contributed to net outflows in stocks.

Yet if you follow price and keep a level head about you, it's much simpler and much more profitable as an investor.