During a slow summer trade, Great Britain rocked the markets by voting to leave the eurozone.

It looked as though the end of western civilization was upon us.

This harbinger of doom would bring plagues, locusts, rivers of fire...

Cats and dogs living together! Madness!

Yet, all it took was a single week, and we are already back to post-Brexit levels.

What the heck happened?

I'm going to lay it all out for you so you can get a better feel for how markets actually work.

Don't Look at The Dow

If all you do is focus on the "big 3," you'll never see the entire picture.

What do they all have in common?

They are all US-based indexes, and the are large cap stocks.

If you had been paying attention at all for the past few months, you would have seen a sustained "risk off" trade going on in stocks.

For example, look at the Russell 2000 index. This is made up of smallcap stocks, which tend to be viewed as riskier instruments as they can move around a lot more.

When the Russell underperforms the S&P 500, it means that there is a "risk off" feel for US stocks.

So while the S&P 500 is within spitting distance of all time highs, the past year's action has not been great for small cap stocks. 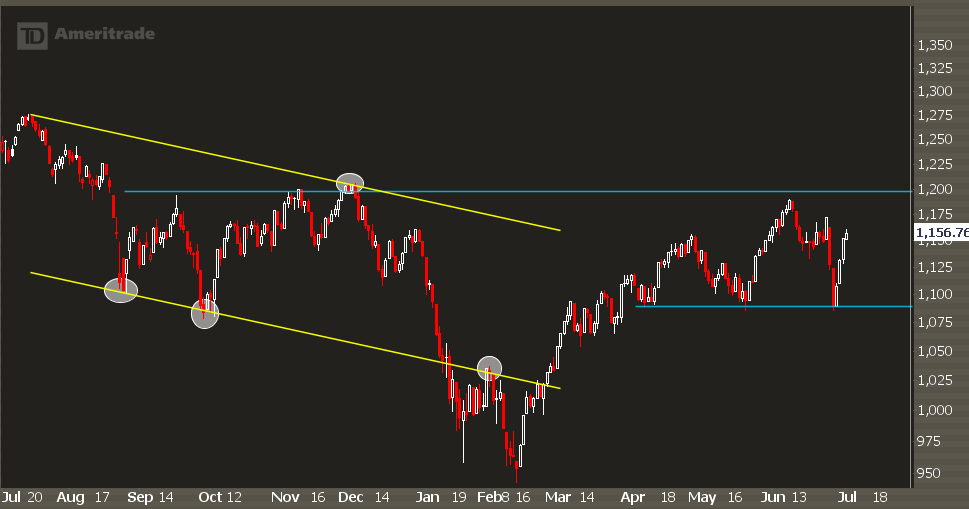 Watch Across the Pond

The Brexit news would mainly affect two areas: Britain, and the rest of Europe.

How have those indexes performed over the past few months?

First, let's look at the FTSE 100-- it's like the Dow Jones in Great Britain:

We can also look at Germany for the other side... the DAX is the main index to watch for German stocks:

Same kind of movement as Great Britain... dropping almost 30% off the highs from 2015.

Clearly, the narrative in these markets is different than what we are seeing in the US. While the Dow doesn't look half bad, there has been siginficant technical damage in European markets, even before the Brexit vote took place.

It Was A Known Unknown

Often times when we have an event like the "Brexit," it has a tendency to fade the first move.

And the bigger the hype of the event, the higher the odds that the event will be faded.

The phrase is called "buy the rumour, sell the news."

So we came into June knowing that the Brexit vote was going to happen.

It was all anyone could really talk about.

And if fund managers were scared about the risks, maybe they would park their money into safer stocks and divest out of Europe for a while.

It's possible that the drops we saw in the markets several months ago had already started to price in some of the Brexit risks.

So when everyone is expecting the markets to run lower... it's possible that those investors who were anticipating that are already out before the event, or have hedged their bets. This creates a floor so the market doesn't find followthrough.

How To View the Field and Profit From Global Events

To get a better edge in the markets, you have to take a step back and look at other things besides the Dow Jones.

For this week only, we are offering a 50% off deal for our Macro Investing Course.

The Macro Investing Course is a 13 video training on how to understand the relationships in the global markets.

Once you finish it, you'll be confident and prepared for whatever the market throws at you.

Our current price is $199, but if you order this week only you will get access to the course for only $99.