The way the VIX has acted over the past two weeks is something that I've not seen... 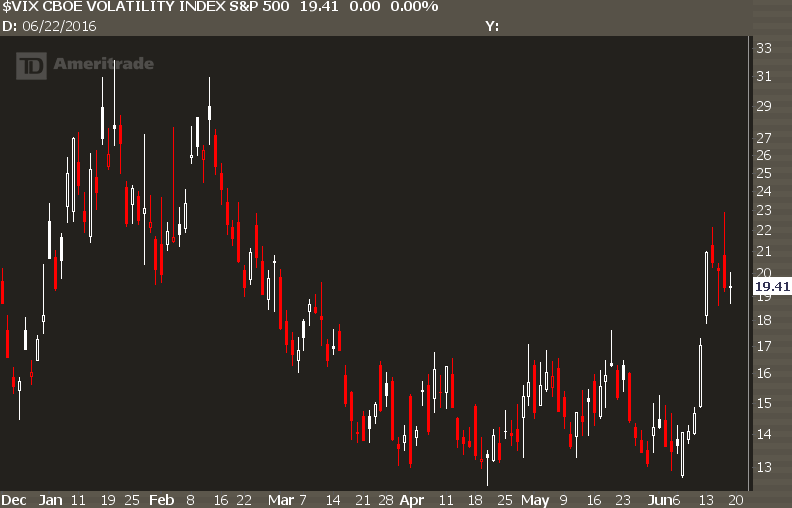 Now this move on its own is not too crazy.

In fact, I would consider this par for the course in terms of how volatility acts.

(And yes, I'm typing this on my laptop while watching the final round of the US Open. Golf is on my mind.)

What really sticks out here is the lack of price movement in the SPX.

Normally, price leads the VIX. If the market sells off, investors get scared and buy SPX puts... which drives the VIX higher.

Yet, the market has been absolutely quiet. 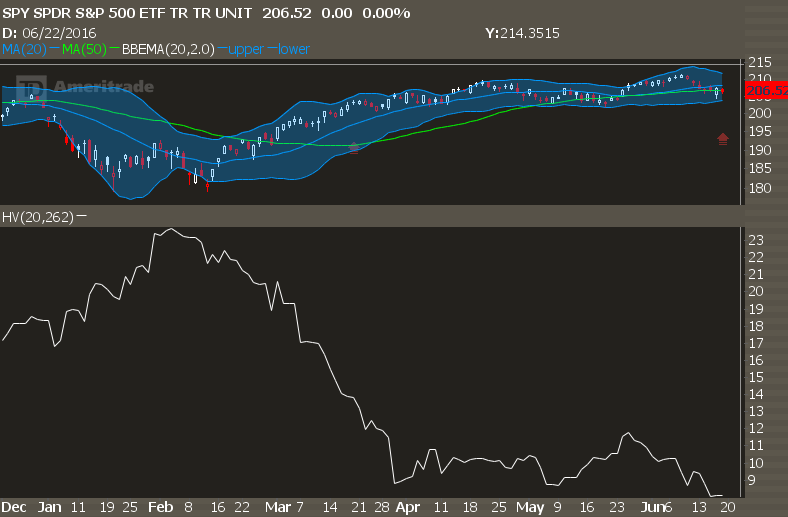 Sure the market has sold off, but the actual volatility sits under 9%.

As option traders, we want to watch the spread between the expected fear (using the VIX) and the actual fer (using historical volatility).

And the kind of move that we've seen absent ANY kind of true downside... well, I don't think we've seen it before.

It's All About The Brexit

The reason we're seeing such a strong move in the VIX without any kind of big selloff comes down to one thing:

The British referendum to leave the EU.

We are seeing expected fear "spillover" into equity risk premium.

Want to see something really crazy?

Here is a chart of FXB -- it's an etF for the British pound. It tracks the movement in the currency markets. 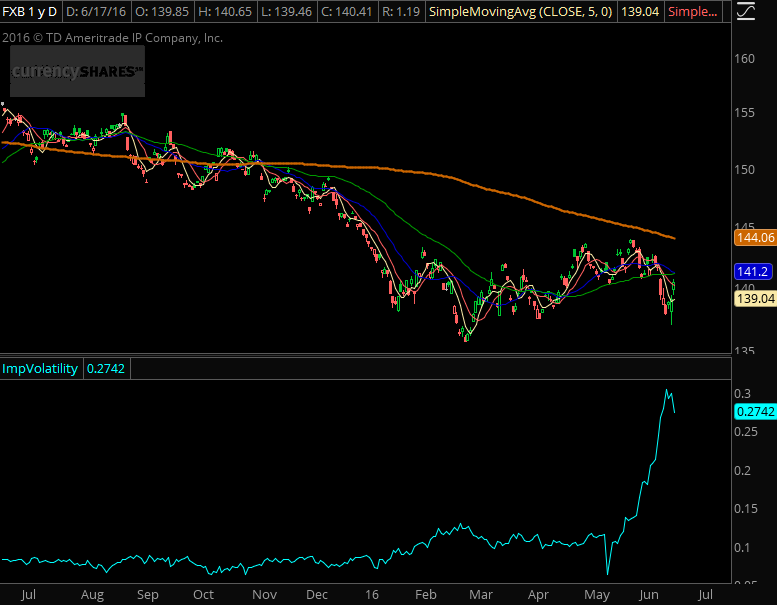 The lower chart shows the implied volatility for FXB options... basically the VIX for the currency.

Here's what I know about reading currency vol...

... anything above 15% and there's some serious shenanigans

... anything above 20% and the market's pricing something really ugly

... anything above 25%? It's not unprecedented but you only see it when the market has already crashed or is expecting a crash.

To put this in perspective, FXB vol hasn't been this high since the market crash in 2008.

This is where the "spillover" theme comes into play.

At some point, hedging currency risk gets too expensive to do.

So if you're a trader needing some "risk off" exposure, at some point you make the choice to pick up puts in the S&P 500 market instead of currencies.

That movement ends up building on itself, and all of a sudden the VIX has spiked to 20.

It's Getting Priced In

The bearish thesis here is that the VIX is full of "smart money" traders that are anticpating the collapse of western finance.

Thing is, I know plenty of stupid option traders. And given how saturated the vol markets are, it's very difficult to say that divergences like this are some kind of a big signal.

I am concerned about one thing... it seems when the markets really selloff there's some kind of move in currencies that really shake the markets.

The crash from August 2015? It was from a change in Chinese currency rates.

The pullback in January 2016? Related to the Fed.

And every summer swoon has been from Greece or PIIGS or some other risk out of Europe.

So of course, the Brexit vote could move the markets.

Yet this is something that we would call a "known unknown."

We know that a market moving event is coming, and a ton of people are hedging into the event.

What happens if everyone is hedged? Then the fear in the market disappates and the actual move in the market is lower than what is being priced in.

Unlike, say, the Fiscal Cliff in 2012, if we do see a Brexit vote it will end up being a lot of risks drawn out over the course of months. It's not a straight up/down risk, but the market is pricing it in as such.

What's the Next Move

Here's my prediction on how this will play out...

It's very possible for the SPX to continue to selloff, maybe trade back to the lower end of the range.

Yet into any kind of selling, the VIX will not continue to skyrocket.

That's because traders will be using any downside action to take profits on their hedges... and the uncertainty surrounding the Brexit vote will start to get sucked out of the premium in the options market.

After that, we'll go back to the narrative that's dominated the market for a year now-- the "will they won't they" news risk around another Fed rate hike.

Now if I'm wrong... if the Brexit vote comes through and the VIX stays up... that's a bearish signal that the markets are about to break.

How To Profitably Trade The Volatility Markets

My favorite vol related trading instrument is VXX. It's a volatility ETN that perpetually sucks.

And we know it will perform like that because of how it's structured.

I have a very simple timing method to enter new trades in this instrument, and also how to trade it using options.

If you want to see how I trade this market, pick up the VXX Trader Course here.