Shocking news in the option trading world has come out recently.

A well known options trader has been involved in an SEC fraud investigation.

The easiest path to take here is anger, or perhaps to mock the whole situation.

And for those skeptics, a victory lap may be in order.

Yet I'd like to take a step back and see what we can learn from this. If you have any experience in options trading, this will be crucially important to read.

Before we dive into what potentially happened, remember that this is currently an open and ongoing case. Facts and revelations may completely change by the time it is settled.

I'm taking a few guesses here and I'm also pulling from my own experiences to give you crucial lessons if you want to succeed as an options trader.

A few years ago, a woman from Tennessee came onto a financial show and talked about her strategy. The headline was that "Karen the Supertrader" had earned over $41 million dollars trading this strategy.

She became a kind of a cult figure in the options world, showing how this simple strategy could be used by anyone to earn significant returns in the market.

Since the SEC investigation became public, the videos have been since taken down. However I have looked into the strategy her firm used as to whether it was possible to earn those returns.

Diving Into The Strategy

The way they earn returns is to sell options and profit from the time decay.

What made Karen's technique interesting is the use of margin.

She would "stress test" her positions, figure out how much stretch the market could have, and size up so that the value at risk was her net liquidation value.

So far, nothing out of the ordinary.

The returns she got were $41 million dollars.

Now, the only way to get those returns is by taking outside money.

Which is what they did. Her fund (Hope Investments) took in something to the tune of $90 million dollars. And with that size and the kind of market environment we had from 2009-2013, it was very possible to earn those kinds of returns by selling options.

Here's an example option strategy that would be similar to what Hope Investments would put on.

The risk and reward is pretty simple.

There's other considerations here like position sizing, scaling in, scaling out and so on.

This is a "high odds" trade, meaning that you should expect to make money most of the time.

The tricky part is how you manage the trade when it goes wrong.

Where it Turns South

From reading the SEC investigation, it appears that things started to fall apart around the end of 2014.

That makes sense. A lot of option sellers got smoked then. 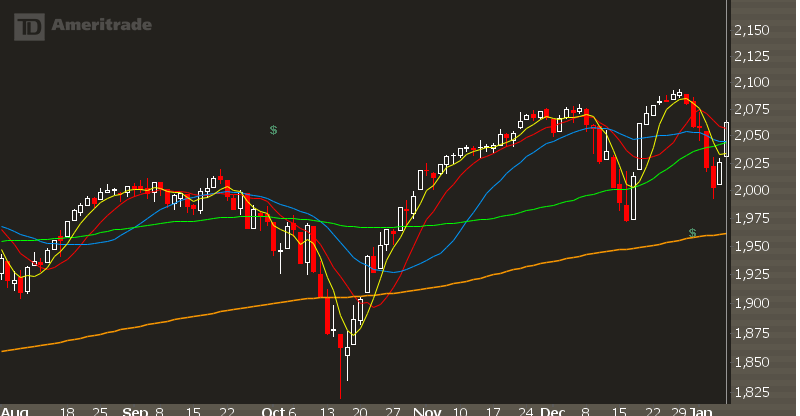 In case you don't remember the backdrop of this trade...

The ebola scare had started to take hold of the markets. The S&P sold of from 2,000 to 1,825 over the course of a few weeks. It got ugly out there.

That's probably not where things fell apart. It was on the rebound.

After the capitulation in October, the market rallied back to 2,000 just as fast.

And then it continued to squeeze.

Overeager option shorts started selling calls way too early. And too many people got short.

It setup the case for a massive short squeeze.

This happens a lot more than you think. A recent example is March of 2016, where Goldman Sachs put out a note that calls were way too cheap. The S&P rallied another 100 points since that call.

So in late 2014, coming into obvious resistance everyone sold calls too early. And call sellers got ran over.

When you are a net seller of options, the biggest risk is not to the downside... it's to the upside. It's much harder to manage a losing income trade to the upside.

So that's my guess here. They were doing fine, but then sold too many calls in size and got runover on the Ebola trade.

This in and of itself wouldn't be a problem with the SEC.

It's that they got greedy.

Once I read how they took a performance fee, I knew that it was the main reason why the SEC went after them.

A normal fund structure is "2 and 20." That means you take 2% of the total assets for overhead and you also get to keep 20% of any gains.

The fee structure for Hope Investments was 20% of realized gains...

When you sell options every single month, you can plan for that cash flow (until things go bad).

If you're trading your own accounts... not a huge deal.

But if you're trading serious size... man you can pull out a massive amount of cash every single month.

Yet if things go wrong, you can end up in a serious drawdown.

One way to manage those losses is to roll the bad options further out in time. You get stuck in the trade for another month, but it allows you to work your basis down in the position.

It's not a terrible strategy.

But when you tell your investors you "realized profits" on that roll... that's where you can screw up.

The monthly performance fee can set you up to be tempted in ways unimaginable when you trade your own accounts.

You get smoked on a bad trade, and it may take 6 months to work back those losses.

That means you won't get that monthly performance paycheck for quite a while. The well has dried up.

But if you just do some fancy accounting, that gravy train can keep going... a very significant amount of money.

What would you do in that situation?

Would you have plenty of integrity and own up to your investors that you screwed up?

Sure it's easy to say sitting behind a keyboard...

Yet the incentive structure makes it an even harder decision to make.

They See Me Rolling...

When you get into a massive drawdown as an option seller, you can get stuck into the rolling trap.

You try and figure out some fancy options technique to get you back to breakeven, even if it takes you months to do.

I've been there. It sucks.

You may get you capital back, but you end up with a massive depletion of your psychological capital.

My guess here is that this is what happened with their fund, and they couldn't keep the numbers game going.

I could go into a lot more detail about this case, but since it's ongoing I don't want to try and speculate too much on this.

Yet I think we have enough to get the lessons we need.

In terms of capital, I'm not talking about money.

There are trades you can put on that are losers.

And sure... you can find a way to get it back to breakeven.

You can roll the trade, you can oversell spreads, you can convert a trade into an even more complex option strategy.

Yet there are some times you just need to take the loss and put your capital to more productive trades.

If you try and stick in this trade, you'll end up with blinders. You'll be so focused on working a bad trade to breakeven that you'll miss out on all the other opportunities in the market.

Lesson 2: Don't Blindly Use Odds in Your Trading

This is going to fly in the face of many other "gurus" out there, but I believe that using odds alone for your trading strategy can lead to disaster.

Immediately, you psychologicall anchor onto that level.

And you start to say to yourself...

It doesn't matter your religion, you must understand that the Market Gods exist.

And when you utter that sentence and send it to the universe...

At some point you're gonna get smoked on a trade.

How you manage that bad trade will dictate whether you will be successful at this game or not.

Here's the thing... I'm not saying that selling options straight up is a bad strategy.

In fact, I think the strategy they use at Hope Investments is incredibly lucrative and profitable in the long run...

... if you know how to properly cut your risk.

Blindly expecting the odds to eventually be in your favor is bad voodoo. The Market Gods will come after you.

The major risk in selling options is how your directional exposure (delta) can increase as the position moves against you.

Knowing how to manage that delta is half art half science.

But you have to do something.

Will it cut into your returns? Of course. It's the cost of doing business.

But you still have to do it. Because once you get stuck into thinking "oh it'll come back..."

The Market Gods will hear.

Lesson 4: Don't Be A Dumbass Accountant

And the market tanks.

So you buy back that put option at 1.20 and then sell another put option further out in time for 1.60.

Did you make money?

You have a loss of .40 from the closed option and no p/l from the new contract.

If you roll options, treat it as a single position and track your basis on a mark to market pricing.

I've had people who have shown me trades where they got blown out on some put sales with massive losses... and it took them 9 months to get back to any kind of profit.

And they believe that they made money every single month through some BS accounting.

Don't lie to yourself, and especially don't lie to any of your investors.

I think selling options naked have a time and a place.

Yet if you're looking to create consistent, sustainable income from options while keeping risks low, then you should look to other trading strategies.

My favorite is iron condors. They are simple to manage and easy to understand.

The way we trade iron condors at IWO is a little different... we are much more aggressive in our risk management as we don't want to tempt the market gods.