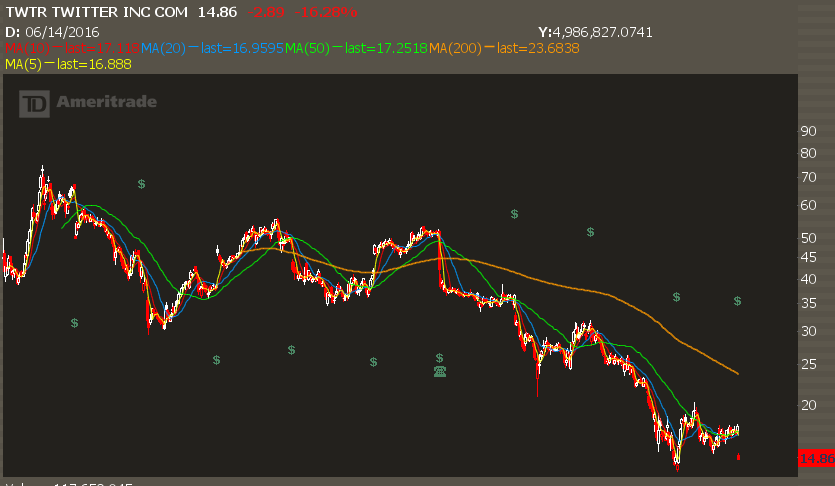 In this analysis piece, I'll be focusing more on the lizard-brain side of things.

Where the power of the narrative matters more than valuations.

The "turnaround" story has been going on for a year or two now, and I think we're approaching the desparation phase of the company.

I believe that this story will play out exactly like Yahoo did over the past several years.

Here's the basic timeline of what happened to Yahoo...

2007 - The original founder of Yahoo comes back and serves as CEO. It doesn't go so well... not necessarily his fault but just an overall lack of direction and talent suck out of the company.

2008 - Microsoft makes a bid for yahoo at a pretty nice price, but it falls through. Some view this is as an overall failure.

And then the market crashes.

In 2009 Yang steps down and Carol Bartz becomes the CEO. Nothing really happens over two years and investors are impatient. Carol Bartz leaves in 2011.

In 2012 they cycle through another CEO and finally land with Marissa Mayer.

This is where things get interesting.

Alibaba's CEO, Jack Ma, is friends with Jerry Yang... and it just so happens that Yahoo owns a sizeable stake of Alibaba.

Investors start to realize this.

And they buy YHOO stock as a proxy for Alibaba.

Sure, you could say that the fundamentals at Yahoo are improving but the way it's being traded... it's just a proxy in anticipation of the Alibaba IPO.

Once the IPO hype of Alibaba fades, so does YHOO stock.

And that's where we are now. 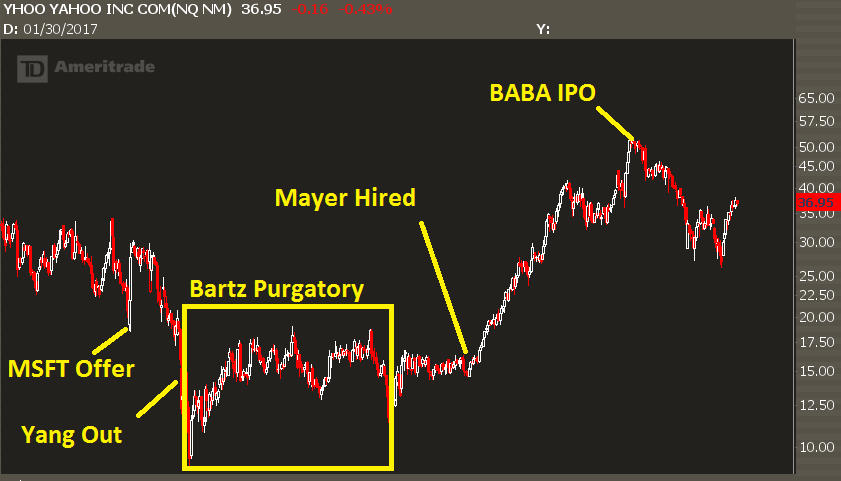 All I'm going to do here is take the exact same narrative and talk about what will happen at TWTR.

I'm breaking out the crystal ball.

July 2015 - The oroginal founder of twitter comes back and serves as CEO. It doesn't go so well... not necessarily his fault but just an overall lack of direction and talent suck out fo the company.

October 2016 - Microsoft makes a bid for twitter at a pretty nice price, but it falls through. Some view this as an overall falure. [Note: any MSFT bid for TWTR is not public knowledge, but I have a feeling that it did take place and is non-public information]

In late 2016, Jack Dorsey will step down and someone from outside the company. Probably a woman. Nothing really happens over a year or two and investors are impatient. That CEO will leave, an interim CEO will come in for a few months.

This is where things get interesting.

During this whole time, an old app called "Periscope" was spun off into its own company, and twitter owns a sizeable stake.

Periscope made a pivot into live sports, cleaned up their product, and now have content that rivals youtube and cable providers. The timing could have been better but they're starting to accelerate.

Investors start to realize this.

And they buy TWTR stock as a proxy for Periscope.

Sure, you could say that the fundamentals at Yahoo are improving but the way it's being traded... it's just a proxy for the Periscope IPO.

Once the IPO hype of Periscope fades, so does TWTR stock.

This is the analog chart: 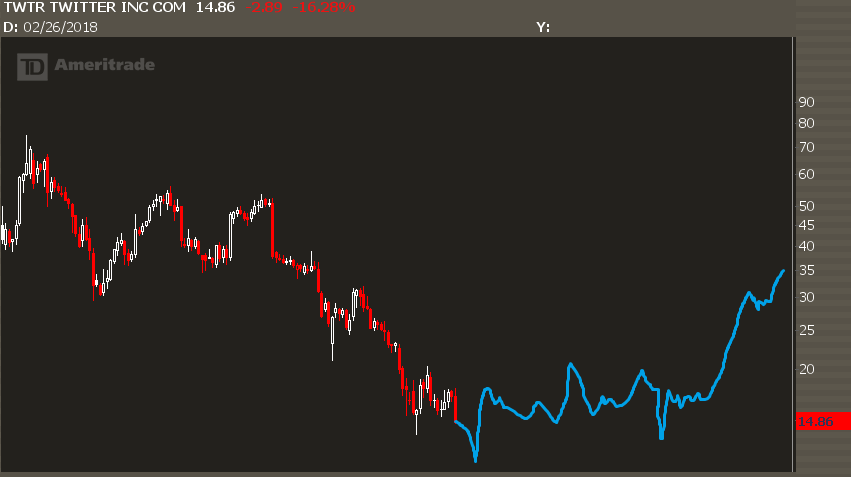 That's about as far out as my crystal ball goes, and obviously it's more of a game than a reasonable investment strategy... but it's close.

Will this narrative take exactly 18 months? Eh, could be longer, could be shorter.

If anything, this exercise will help you understand that the psychology of investors and others involved in "the game" is fractal in nature, and stock prices have a tendency to reflect that.

The best way to play it is through covered calls. Odds are the stock will be in "CEO Hell" for at least a year... so selling puts and calls against common will allow you to get your basis down into the single digits.