It's been a little over a month since the market crashed.

Quite a wild trip it's been.

I'd like to walk you through all the thoughts I had leading up to, during, and after that time to give you some insight into how I approach the markets and some of the absurdity you experience when trading.

For the first 7 months of the year, the Dow Jones had been in the Tightest. Range. Ever.

For more context, here's a chart showing the Bollinger Band width of the SPX on a weekly chart. 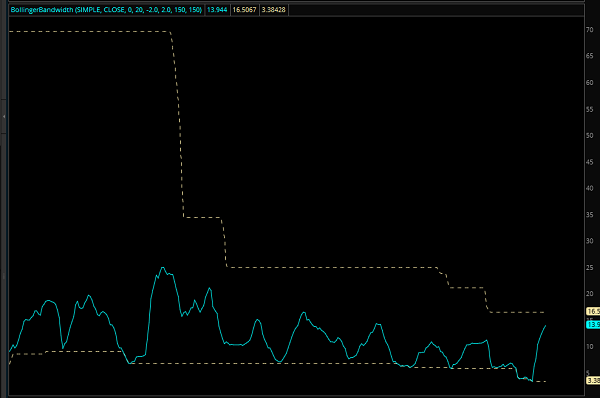 Bollinger Bands can show you the expected volatility relative to what we've seen in the past.

In simpler terms, it was the smallest non-reverting volatility-- in at least 20 years.

It had been a “golden age” for income trading. Iron condors were profitable and boring.

Just like markets, volatility moves in cycles. So when you have vol low for too long, you should expect and anticipate volatility expansion.

So yeah I expected a shake and bake, maybe a "normal" correction... but not this.

Fear sells. If you’re scared, you are more likely to plunk down a couple hundred bucks to have some guy tell you exactly what you want to hear politically and give you advice about how to protect yourself against the fall of the West.

I don’t need to put any charts up to show you how those have fared.

Breadth Sucks, Half Of Market Already In A Bear

Rightfully so, many bearishly inclined investors pointed out how the markets were riding on the backs of fewer and fewer stocks. 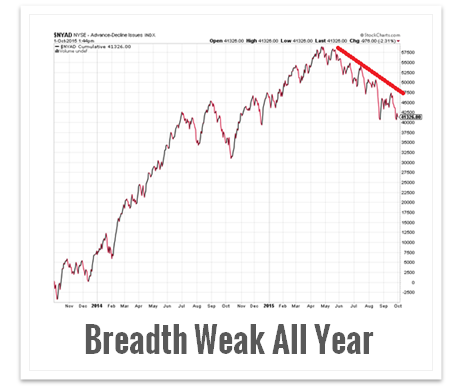 High beta tech and biotech were holding up the Nasdaq, and momentum on earnings was keeping the Dow elevated.

In the meantime, commodity stocks continued to be bludgeoned by the strong dollar and weak oil. By the time the crash came, oil stocks were already in a mature bear market.

And emerging markets were pretty ugly, which leads us into...

Similar to the 1997 Asian financial crisis, you had too much emerging debt that had to be paid back in dollars.

And if the dollar is strong, it becomes harder to sell things in a local currency and pay back the debt in dollars. 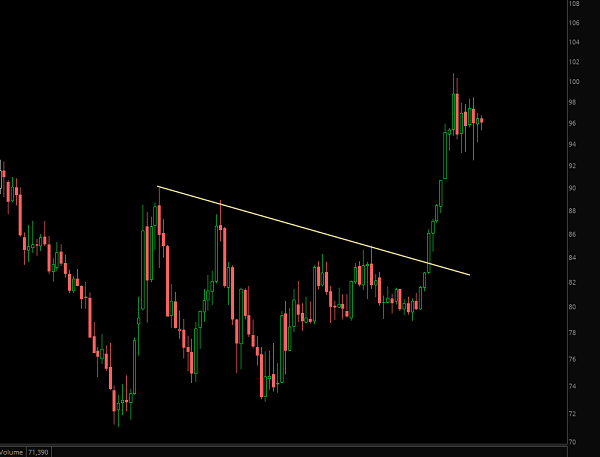 Basically, this theme was hanging on by a thread.

Oil has been in a bear market.

On the supply side, we've had a massive increase in oil shale tech that's come online.

On the demand side, China was weak.

During this "shale revolution" there was a ton of high yield debt issued for O&G companies. At current oil prices, many of these companies can't pay off the debt from selling the stuff they pull out of the ground.

Here's a chart of the performance of high yield debt compared to the 10 year yield: 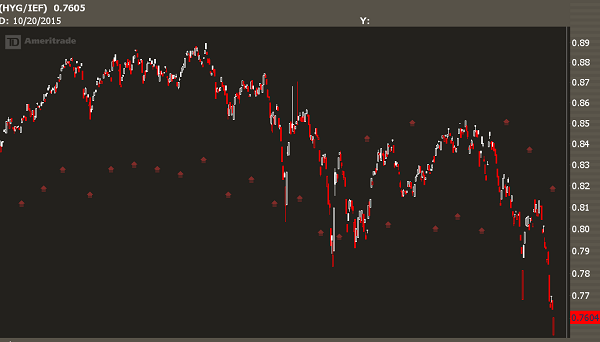 It's been ugly for a while.

And that's the thing! If you were short because of terrible breadth or credit market risks, you were months early. Timing still mattersn.

The Fed Got Faded

A key “warning signal” was back in Aug when there was a Fed meeting. The FOMC minutes came out and it was what the market wanted, but after a short lived rally the market continued to find sellers and selling led to more selling.

This in and of itself would have probably set off a “normal” correction, but then...

China revalued their currency. Everything starts to smell of 1997, or potentially like 1998 when Russia devalued the ruble.

Way too many people are leaning the wrong way, and there’s no liquidity. We know how this played out.

Then the markets crashed.

A 10% pullback is pretty normal for stocks to have in a year. I think the average is something like -12%.

But to have it all in a 5 day period is pretty unprecedented.

So we come into Monday and futures are accelerating to the downside. Then they hit circuit breakers.

And in comes a liquidity issue.

Individual stocks and ETF’s see massive gaps lower. But even if you wanted to buy the dip, you really couldn’t.

The options market didn’t open for an hour after the open. Stocks were moving so fast that unless you had market buy orders on the open you didn’t get a chance to buy AAPL at 95 or FB at 75.

It was a crash that left the profits only to large institutions.

This is my surprised face.

The Analogs Come Into Play

As we have a tendency to do, humans search for patterns.

So everyone starts looking at past crashes to see if history will rhyme.

Ray Dalio event went as far back as 1937, talking about how Fed policy is similar to that.

Everyone Becomes An Expert in Everything

High volatility markets cause you to look at your assumptions. Is your investment or trading strategy sound? Are you taking on too much risk? What is your blind spot?

Thankfully, you have plenty of newly minted experts that are willing to open their mouth and sing songs about things they are totally unqualified to talk about.

I’d like to think I’m an expert in the VIX. I’ve analyzed it to death and actively trade vol instruments.

So when people start talking about an inverse head and shoulders in the VIX, I end up with a nervous tick.

And when people give opinions about the VXX without knowing how volatility futures come into play, I feel bad.

It wasn’t just in vol products.

Because when markets are moving 1% a day there must be a reason for every single little tick.

Ideally you’d have some asset that protected you into the crash.

Basically the only thing that worked was long Yen or long vol.

And boy did long vol work.

Volatility Instruments Are Now Over Subscribed

There’s been a continuing shift out of vanilla hedging instruments like SPX puts, while more and more institutional players are using VIX products to protect against downside.

I’ve noticed it all year, where any decent pullback led to an over-sensitive move in the VIX.

The thing is, there’s only so many people that can get involved with vol products before liquidity runs out.

And that’s what happened.

Here’s a chart of VVIX -- it shows the demand for VIX options: 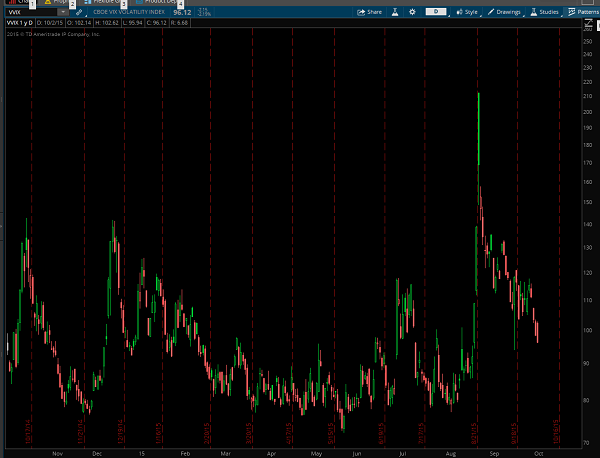 That’s the largest value ever. Even more than the 2008 crash.

Expect this trend of sensitivity to continue-- and realize that "smart money" really doesn't exist any more on the options market as a whole.

There’s Now Only One Bull Market

The only thing that seems to be working is One-Week Fantasy. Seriously, it’s been just a few weeks into football season and I’m exhausted seeing DraftKings ads.

Too Many Overhedged, Leads to Opex Rally

Often when you have a spike in the VIX like we did, you end up with way too many investors hedged and underexposed to the downside.

If people buy premium to reduce risk, then they don’t have fear of risk, which leads to a lack of downside fear.

Which means the market won’t trade to the downside hard again until all that premium burns off.

Here’s a chart of the SPX, with September options expiration highlighted. 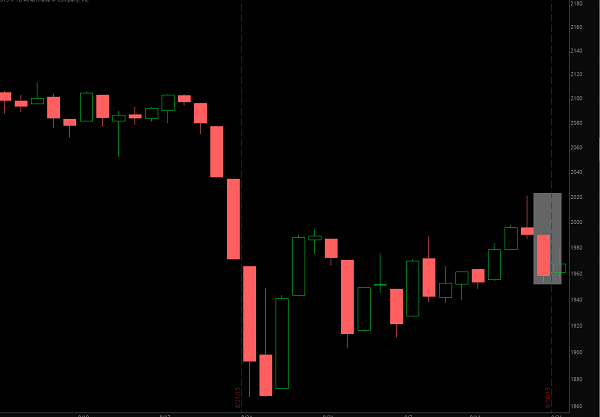 Now that the market sold off aggressively and more people bought premium, I would not be surprised about a lack of fear until after Oct opex.

Everyone Looks for The Retest

There’s a psychological hack called “anchoring bias” that is often reflected in the market.

For example when a stock rallies to 97, odds are it will run to $100 because it’s a whole number and people anchor off it.

The collective psychology of the market starts looking for a retest of the lows.

When too many people focus on a level, one of two things happen:

Right now we’re in scenario 1. If we get a short squeeze into Oct opex and then earnings suck, we could end up in scenario 2.

Uncle Carl dropped fire onto the internet, with a 15 minute video explaining what everyone already knows.

Yes, corporate buybacks are running hot -- except for AAPL, which is trading at a 9x multiple.

This is all reminiscent of back in 2011 when Tony Robbins put out a “warning video” explaining how a trusted source (probably PTJ) talked about how things could get really, really ugly.

And yeah, it could be different this time. But all the risks outlayed in the video are pretty freaking obvious, now it comes down to whether there’s enough liquidity for those stuck in these positions to unwind their trades.

Now it comes to brass tacks. Instead of talking about what has happened, what about the “hard right edge?”

A man walks into a bar, and sees an options trader.

The option trader nursing a beer, scrolling through his phone and pretending to ignore CNBC on the TV at the back of the bar.

The man asks the option trader “How are you doing in the markets?”

The option trader says “ask me at options expiration.”

That was the joke. Sorry.

For my trades and the trade alerts at IWO Premium, we’ve done pretty good.

Into the crash, I was smoked on some income trades and put sales but the reversion into September options expiration turned these trades to small losses and profits.

In fact, all my put spread sales were profitable because of my stock selection and scaling techniques.

Simply put, if you’re going to trade options in this market, trade structure and position size matter much, much more compared to where your entry or stops are.

As for the market here’s what I think…

We’re probably going to rally into Oct opex. We got enough people that rebought hedges, and we’re seeing a momentum divergence already in the markets and some individual stocks.

If you want specific trade alerts and you want to join a community of amazing option traders, subscribe to IWO Premium.