The last thing I want to do is end up in the "bullish but cautious" group.

It's really crowded over there.

However, I'd like to share with you some thoughts on the market and why we've had it so good for the past 6 months.

The S&P 500 hasn't seen a pullback more than 5% in a while. The past few months, while they have been a grind, haven't been terrible either.

If you've been playing the buy the dip game, or at least sticking with individual stocks showing relative strength, it's been pretty easy and benign tape.

Throw in some income trades like iron condors and butterflies into the mix, and you've had a really good thing going.

Here's What Is Possible On the Downside

It seems that any time the markets see more than 1% to the downside in a single day, the pain is amplified through social and mainstream media.

It's as if nobody remembers what a proper pullback feels like.

Since the lows back in 2009, the market has seen its fair share of pullbacks. Bill Luby over at VixAndMore has been keeping track of these pullbacks, and on average each pullback has been about 6.7%.

Here's where a 6.7% pullback off the highs would put us: 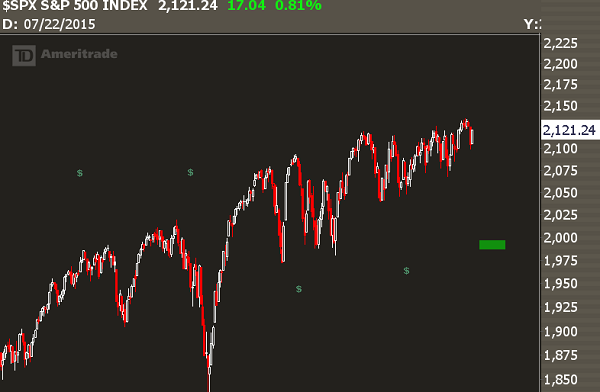 Do you know how much pain that would bring? Investors are so conditioned to these super shallow pullbacks, if we saw a normal market pullback (which could be considered healthy in this market) there would be gnashing of teeth and demands for central bank interference (again).

On a normal pullback.

Well the big question is then...

Why Hasn't It Happened Yet?

I think it comes down to a few things.

First, we've got central bank voodoo. We don't really know when the Fed is going to raise rates. First it was June, then September, and odds are it will be pushed out until 2016. That lack of proper central bank certainty has kept this market from breaking down-- and also from ripping higher.

Third, if there are investors in the market but are thinking of bailing, they haven't had a truly compelling reason to do so. Bad economic data is buoyed by the fact that the Fed will push back a rate rise. So many are anchored on central bank actions... I don't think it should be this way, but it's my job to discern the motivations of major market players to get an edge in the market.

As a quick aside - this is probably why the markets haven't ripped higher, either. I believe that often the best way to get higher prices is to flush out the market with lower prices first. A Pullback Paradox.

Finally, the hedgers are still out in force. The volatility futures market continues to be adopted by major participants, and that hedging continues to keep fear low. If you're hedged, you don't sell your stock. And since VIX futures have been in contango since forever, it helps to explain away this part of it.

So I guess I am in the "bullish but cautions" camp. Along with everyone else.

It's like we're playing a giant game of musical chairs with our risk, except the music won't stop because DJ Yellen keeps mixing in new songs.