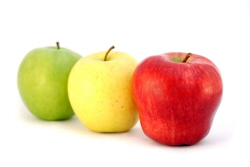 When trading options, the best edge you can get is understanding the role of volatility in both the stock and the options.

What that means is there is no "one size fits all" kind of option strategy.

Your trades should reflect what you think about the stock - not only what direction you think it will go, but also how fast you think the stock will move.

Over the past few weeks, we've taken 3 different trades in AAPL at IWO Premium - and all of them profitable.

Let's review how I did it.

After a massive rally up to $120, AAPL saw a "volatility event" and finished down a bit. 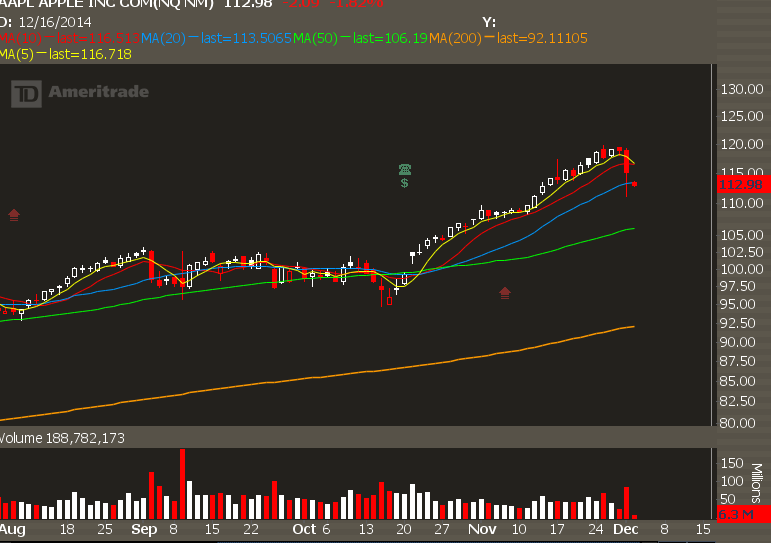 And because I know that I tend to be early on pullback trades, I suggested to go in half position size and then add at 1.50.

Bull put spreads were chosen because this is a pullback trade, meaning that the stock is selling off and we're expecting the downside action to be not as great as what the options are pricing in.

This trade was set to expire worthless into January expiration, but because AAPL was trading right around 105 I made the call to close out the short 105 put for .10.

The first half of the trade had a profit of $70 per spread, which is a 16% return on risk.

If the second half was added (and I didn't add) it would have been a profit of $140 per spread, which is around a 40% return on risk.

This is one of my "bread and butter" trades: find a stock in an uptrend that is pulling back, and sell credit spreads in the direction of the primary trend.

Another one of my favorite setups is to look for a "captain obvious" level where way too many people will have their stops.

What you'll see is a "stop run," where the level is violated and everyone thinks the stock is now broken and the stock is ready to collapse.

And then it fails to see any followthrough and it reverses higher.

On January 6th, AAPL broke down underneath its key support at 106, and I had a feeling that way too many people were watching that level. 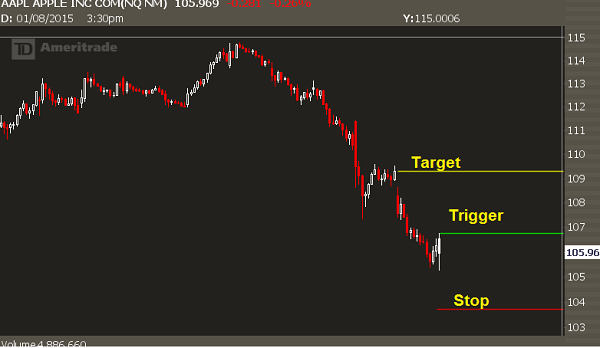 A key point here: it's not a good idea to use the low of the day as a stop because it sometimes gets tested a little lower. You want to have some wiggle room.

After two days, the stock hit my first target, which is where I sent an alert to scale half of the options at 7.20 for a profit of around 1.50 per contract.

This is known as a vertical roll, and allows you to take cash off the table but still keeps you in the trade. I also set a trailing stop just under 111.

The same day, 111 is broken and the Feb 115 calls are closed for around 3 bucks (depending on the fills).

Here's how the total execution of this looked like:

Basically, if you think that the normal volatility of the stock will be greater than the cost of the weekly straddle, you should buy that straddle.

This makes many people uncomfortable because these options have a ton of time decay. But if the stock sees some decent movement, the time premium is replaced with intrinsic value and you can be profitable.

On January 20th I sent out a trade alert to buy the AAPL Jan4 107 straddle for 3 bucks.

Here's what the risk of a single straddle looked like:

Simply put, as long as AAPL sees $3 worth of movement in either direction, you're at breakeven. The biggest risk to these trades is reversion so it pays to be aggressive in taking profits.

The next day, AAPL saw a 3 point move to the upside. I sent subscribers an email to either:

Can you make money just from timing the market and using long options only as leverage?

Yeah, but it's really hard and you can blow out your account.

Can you just be a blind option seller and only focus on collecting as much premium as possible?

Sure, but if you get one bad trade it can wipe out weeks (or months) of hard work.

I believe that if you are looking to build aggressive and sustainable wealth with options, it requires a more nuanced approach. Sure it can be a bit more complicated but that is where the edge lies.

Join me and the other traders at IWO Premium. You can learn more here.