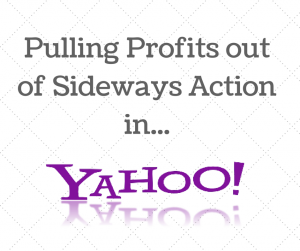 Using a simple "parabolic" setup, I was able to pull over 30% out of a YHOO position in under 2 weeks. Want to see how I did it? Read this post for a full trade rundown.

When a stock has a big breakout on earnings, it has a tendency to continue in the direction of the breakout.

This is known as Post Earnings Announcement Drift, or PEAD. It's a very well-known phenomenon in stocks and is well documented in financial research.

But what happens after the honeymoon is over? Does the stock collapse outright or does something else happen?

In my experience, stocks that see massive breakouts on earnings will tend to have 2-3 weeks of really good price action. After that, the stock then becomes rangebound rather than seeing any kind of parabolic blowoff top.

Keep in mind that my experience is more towards large cap, large float stocks... the trade is completely different if you're dealing with low float or penny stocks.

If you come from a directional trading background, you may think that a rangebound stock offers little in terms of profits.

But with options trading, the simplest profitable trades often come from stocks that want a pause.

On November 14th, I decided that YHOO had seen enough of a move to the upside and was ready for rangebound action. I made this call based off of the duration of the rally, the lack of any substantial pullback, and some other technical readings.

The trade alert I sent out to IWO Premium members was:

This trade is known as an iron butterfly. It's called "iron" because it uses both calls and puts.

I need to provide a little more explanation to this trade.

If you just look at the breakeven levels at options expiration, you may find that it has terrible odds that this trade will be at a profit, simply because YHOO moves much more than the profitable range.

The way I structure these trades is to scale into the trade. If YHOO continued to squeeze, I would roll the call spread higher-- this would mean I am committing more capital to the trade and reducing my max reward in exchange for better odds. The overused phrase in trading is "never add to a loser," but it's different with option income trading and if the adds are preplanned, the size you take is lower and it's good risk management.

This trade ended up needing no adjustment as YHOO failed to squeeze much higher after that.

Here's what the trade looked like after two weeks:

After the pullback on December 1st, we were able to close out the trade for a 35% return on risk, after a holding time of 2 weeks.

The goal profit target on these kinds of trades are around 20%, so this trade ended up working out great.

Is this a complex trade? You bet.

It takes a little work to understand how to take these trades, and that's why I'm here.

If you want to get trade alerts along with a world class options trading education, then you should join my trading service.