Well, the opposite is true.

2014 has not been nice to high-beta tech names. My thesis for this selling is that too many came in leveraged to the teeth chasing the same names, which is why the rest of the market seems relatively unscathed.

So where has it been ugly? Let's take a look. 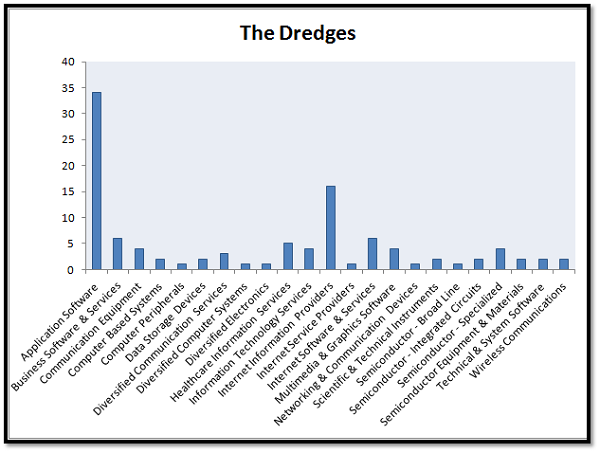 This graph looks at the industries hit the hardest in this pullback. You can see the filtering criteria here.

To nobody's surprise, software and internet have been hit the hardest in this pullback. These were also the stocks that had massive moves back in 2013 (and some had huge runs at the very beginning of this year).

Many are blaming it on the new FCC chairman, or heartbleed, or whatever.

I think it just has to do with a hedge-fund-roach-motel theory where everyone was chasing the same stocks at the end of 2013 and this is one big sector deleveraging.

This reminds me of 2011 where some of the high flyer names in certain areas got shmammered:

Eventually the rest of the market took a downturn driven by a US debt downgrade and just plain momentum.

So... is it different this time?

Tough to tell. The macro backdrop is a touch different and the only near term risk seems to be saber rattling by Putin (who needs high oil prices to balance Russia's budget).

And then we've got earnings. Already there's plenty of names that have been selling off or at least not moving on good earnings, which is something you don't want to see.

If that theme continues, it's difficult to maintain the range we've been in.

Here's a new screener. It's built off the one previously discussed, but it's also stocks that have high q/q sales growth and earnings coming up very soon. Those are the names to watch. If we see a continued drubbing, it means that this selloff hasn't fully priced in any changes in earnings. But if we start to see the selling stop, that's when a bounce in the nasdaq will be sustainable.