Doug Short over at Advisor Perspectives recently posted a chart detailing how NYSE Margin Debt skyrocketed through the second half of 2013 and into this year: 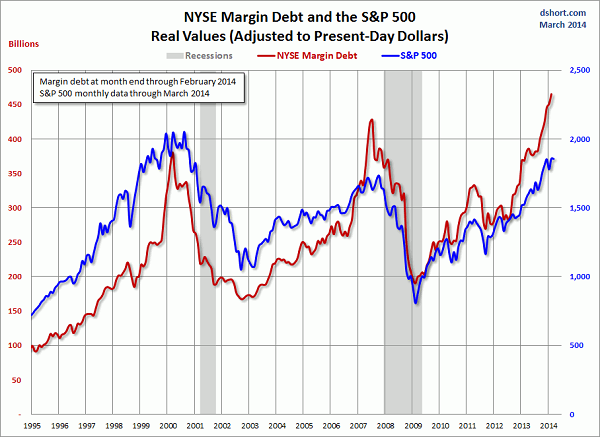 After an 8% correction in the Nasdaq this seems a little bit of a "hindsight trade," but it serves to establish what kind of correction we are dealing with.

If you're an investor that is using margin on a trade, what stocks will you be in?

If you're chasing 2013 returns in 2014, there were a few distinct pockets that you would plow money into-- namely Biotechs and high beta Nasdaq names.

This idea, combined with the fact that the rest of the world's markets are doing fine, lead me to believe that this pullback is a function of reversion, both fundamentally and technically.

Perhaps some of these stocks are selling off hard as reality around earnings sets in.

And the significant outperformance US stocks saw in 2013 is starting to normalize as the rest of the world plays catch up.

My conclusion is that (at the moment) this selling is not due to a systemic risk but instead a investor deleveraging of the strongest stocks in the strongest market.