Since about October, anytime the market has seen a hint of selling, the VIX overreacted as investors loaded up on puts.

It became a vicious cycle, where the put buyers would end up overprotected and underexposed, and the market drove higher until their protection expired. And then we'd see another downmove causing put buyers to step up again.

Is this time different?

At IWO, we have a particular setup called a "buy the blood" strategy using the values in the spot VIX.

The setup is as follows:

1. The VIX moves above the 2nd standard deviation bollinger band.

2. The VIX then makes a higher high on a non-consecutive day.

The rationale behind this setup is that those that buy options on the "higher high" are being forced into protection, which often leads to a near term bottoming process.

We've seen this setup 3 times over the past 6 months: 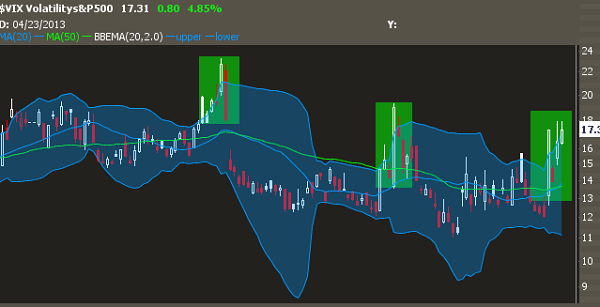 If you feel like you have way too much upside exposure in equities, then buying puts still seems like a decent idea if things go wrong. However if you have plenty of dry powder, you may want to consider getting into some bearish volatility trades like bull put spreads or iron condors.

The problem with the "buy the blood" setup is that when it doesn't work, things tend to get really volatile in equities. So make sure to have your exit plan defined beforehand along with any adjustments to reduce exposure in your positions.