In 2012 there was a good amount of market volatility. Domestic event risk such as the election and the fiscal cliff drove the second half of the year, while newsflow out of Europe in the summer kept the market rangebound.

And during that time, AAPL stayed strong. An institutional bastion of strength. Their balance sheet, combined with a dividend and relative strength, forced money managers to take a position.

Even if the market had issues, AAPL could do no wrong.

It became its own asset class.

Analyzing the relationship between asset classes is a good way to determine direction of equity markets.

For example, the correlation between treasuries and equities is negative, because whenever money flows out of treasuries, it has to get parked somewhere-- and that often is stocks.

Another case is when a central bank starts infusing financial markets with liquidity. The BoJ is doing that right now, and you'll see that a main driver of the move into risk assets has been the yen.

And in this brave new world where AAPL is its own asset class, we can see how if money flows out of AAPL it has to move elsewhere.

If you are a fund manager who sold AAPL in the past few months, do you hold on to only cash? No-- you put it into other equities.

A quick back of the envelope calculation (I counted on my fingers so this may not be accurate):

Current market cap is 483B. So from the top to now the stock has shed about 260B in value.

Current S&P market cap is around 13 Trillion, so 2.7% of that is 351B-- pretty close to the overall market cap that AAPL has lost.

What this is Missing

But if you're looking for AAPL to be a market leader, that's not what the current 3-month correlations show: 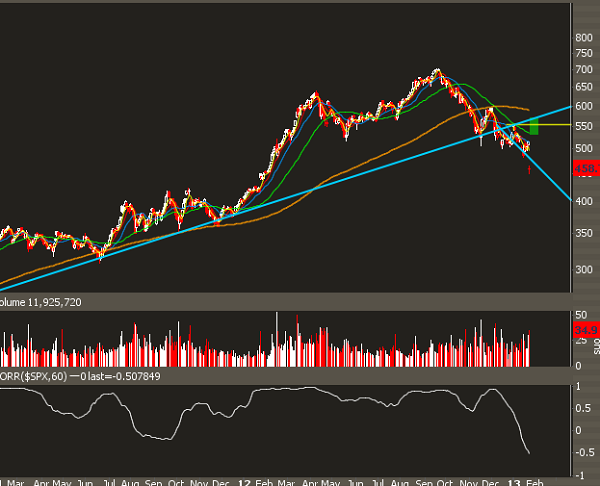 So you want to be an equity bear? You may want to get long AAPL.