This chart is the distribution of 4-day returns in the SPY over the past 20 years. 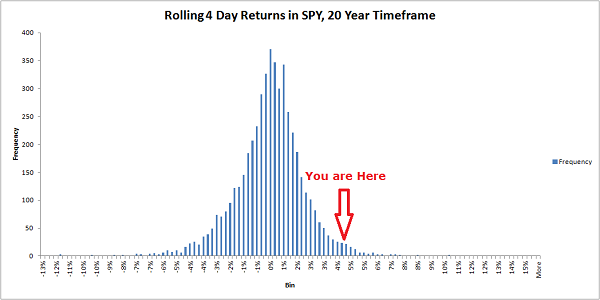 As expected, it turns out to be a bell curve, and that the odds of extreme percentage movements in this timeframe are a function of a normal distribution.

The monster gap up experienced on Wednesday has left the market structurally unbalanced. For indexes, large upside moves like this occur during volatile bottoming processes, not near the starts of trends. But since the fiscal cliff issue was effectively one giant "earnings risk" trade on the domestic markets, that left things a little unstable.

While there is a possibility of a "breakaway gap" in equities, it is hard to believe that we won't see at least a partial gap fill.

So yes, equities are due for a correction. That doesn't mean a massive selloff-- it doesn't mean a selloff at all. Equities can correct through both time and price, normally a little of both.

This isn't an easy opinion to have as the buying in leading stocks has continued unabated since the Wednesday breakout.

On a daily timeframe, this is not a time to be aggressively long. Focus on being a manager of risk until the market structure comes into more of a balance.