Every time I step back and look at a chart of the $SPY, I say 2 things:

1. From January to July, we were in a neutral, mean-reverting range.

So far that has been a pretty decent framework to work with.

But there are many others that are bearish, those praying for a market crash, but they don't realize that they are bullish.

Bullish on trend. And they've been wrong.

But this market has been one, giant, mean-reverting mess for nearly two months now. And if you've been playing for a breakdown, you've been wrong.

I've said in the past that this is nothing like 2008, but that was comparing current volatility. When we look at the price action from the crash in October, you'll notice something: 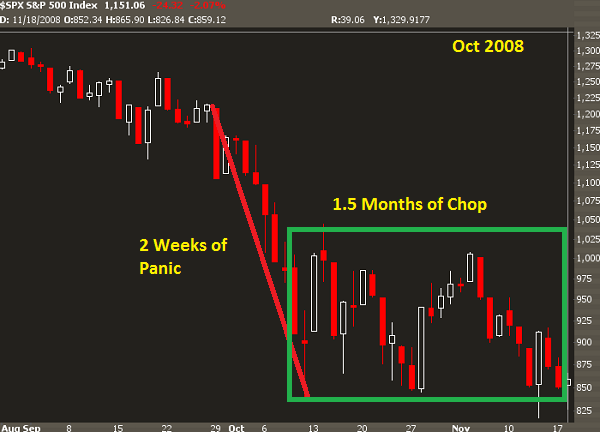 So if you missed the first part of the market crash and assumed that there would be no mean-reversion, you would have lost money.

Yes, the crash in 2008 was punctuated with many opportunities to load up on puts and play for the expansion in volatility in trend. But it was also punctuated with failed breakdowns, sharp reversals, short squeezes, and some of the most violent bear market rallies that left many traders leaning too short and wrong.

Lesson here? If you've been short biased in this market but have been playing the mean-reversion game, September was incredibly profitable for you. If you believed we were headed to 850 in 2 trading days and loading up on short term puts in the hole, you've probably seen a significant drawdown.

Playing a bear market to the short side requires a lot more agility than just simply getting short when the voodoo spirits start telling you to look for a breakdown.