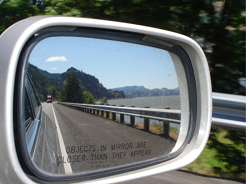 Found this quote from a trader who is praying for a global recession:

One of my biggest regrets is that I did not make as much money as I should have done in the crash of 2008.

The author has been making the rounds on some non-financial sites so I though I'd chime in.

Recency bias and hindsight bias can lead to a perception of the market that causes underperformance. This market phonomenon was clearly evident during the bull run in 2009 as implied volatility stayed incredibly elevated as investors were still expecting "the next leg lower."

Bill Luby lays it out from a post I have referenced several times:

Disaster imprinting refers to a phenomenon in which the threats of financial and psychological disaster were so severe that they continue to leave a permanent or semi-permanent scar in one’s psyche. Another way to describe disaster imprinting might be to liken it to a low level financial post-traumatic stress disorder.

There have been traders, both short term and long term alike, that have been looking for a retest of the 2009 lows or for the "next shoe to drop."  They've had this outlook since the S&P was at 850, and the "wall of worry," so to speak, has been ever present in spite of bearish economic conditions.

The goal of a trader is to align your exposure and risk with the current market structure and trend. There is a huge difference in saying "the market wants higher" and "I want the market higher."

Could we see $SPX back at 850? Sure, we could also see it back at 1400. My job is not to pray or hope for any directional movements, just take trades as the market dictates.