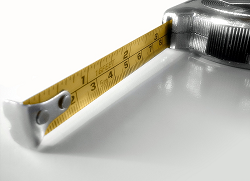 Back in the day when the market was in a secular bull market, the way for a firm to measure performance was to compare its gains and losses to a benchmark index. We've seen a move away from that system to "absolute return." Either way, performance is often measured as a function of percentages, or basis points.

Problem is, you can't do the same thing in the options market, and it's dangerous to think that way.Let's say that you go out today, and sell an out of the money put on AAPL for 5 bucks. That means you take in a premium of $500 in exchange for assuming downside risk.

Maybe AAPL goes higher, maybe not, but at expiration the put option you sold expired worthless, or $0. Since you sold it at $5, and bought it back at $0, that means your gain was 100%, right?

When you measure performance, it needs to be done as a function of total risk taken in a particular trade. If you sell short a stock... let's say RIMM for example, and they go out of business, then you've made a 100% gain, and you took a large directional risk to put on that trade.

It's the same thing when you're buying options. If there's a company that gaps down huge on surprise guidance, of course the puts will have gained 1000%. But that doesn't reflect the true nature of the risk you took!

Remember this: in options trading, there's more risk relative to the price of the option traded.

Keep this in mind when you see someone boasting an average 80% gain per trade in the options market, they're probably not telling the whole story of the risk they are taking.

So what are some good ways to measure performance in the options market? Great question, and we will get to it in a later post.