It's the Relationship, Stupid

I love comparing prices of two different assets. While it is important to understand the nature of a market individually, by showing the relationship and correlations between two assets we can often get a better picture of how one market will affect another.

One of the points he makes is that funds used to purchase oil will often go to countries we're not really fans of-- and higher oil prices give them more power and the ability to fund just a bunch of baddies. In turn, the price of oil is often negatively correlated with social and economic freedoms in oil-rich dictatorships.

How can a people stay repressed? Simple, buy them off with the oil revenues. Gas is super cheap in Saudi, and governments have kept food such as rice and corn super cheap to appease the population.

This works until it doesn't.

Chavez and Mahmoud start to run into issues when the market price for food rises faster than the oil revenues they take in. If, for example, corn spikes up while oil prices stay flat then they have to raise prices on food, and riots ensue.

I'd argue that the unrest that ocurred in North Africa and the Middle East has been caused by this relationship.

The Chart to Watch

We're going to compare the performance of DBA to DBE. This is not the "best" relationship to monitor but it's one that I can monitor quickly if needed. Listed below are the current holdings of the two. Do you see how this relationship works? 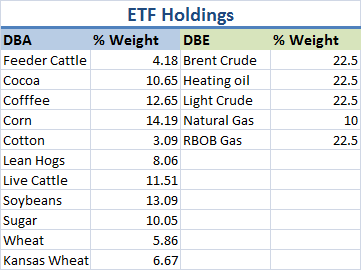 When DBA is low and DBE is high, petrodictatorships can afford to keep their populace happy with cheap food. When the relationship switches, it becomes less affordable to sustain that level of happiness and bad things start to occur, which is often good for the West. Here's the weekly chart starting at 2007: 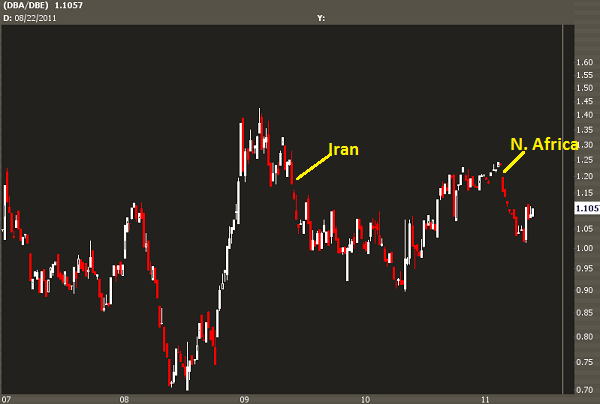 This relationship is not the only driver. More information available to world citizens coupled with aftershocks still felt from the credit crisis are certainly playing a part here. But if this relationship persists these oil-rich leaders will have to start considering other alternatives besides buying off everyone with bags of rice.

Is there some financial trickeration that the US government could do to continue this relationship? The crudest method I can think of is an import tariff on crude imports and an export tariff on food exports. This doesn't have to be a permanent change-- enact it for 6 months and you'll see the Ayatollah sweating through his neckbeard.