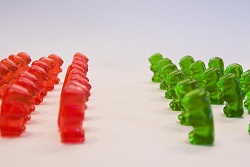 Disclaimer: This is all spec on my part and constitutes circumstantial evidence. The amount of research I put into this was about 5 minutes on a search engine. Please don't sue me, Ma Bell.

There's been news floating around recently about the Senate antitrust committee looking into practices by GOOG and how they practice their business. Here's the snippet from the Senate release:

In recent years, the dominance over Internet search of the world’s largest search engine, Google, has increased and Google has increasingly sought to acquire e-commerce sites in myriad businesses.  In this regard, we will closely examine allegations raised by e-commerce websites that compete with Google that they are being treated unfairly in search ranking, and in their ability to purchase search advertising.   We also will continue to closely examine the impact of further acquisitions in this sector.

I believe the acquisition they are referring to is ITA, which owns very, very powerful travel search software that may provide Google with a leveraged foothold in the lucrative travel space.

So far, so good-- this seems par for the course. Until this article comes out on Bloomberg about how Mike Lee, a Republican Senator, is going after Google. This is a flag in my mind because his political party are generally not the type to go after businesses in this manner.

What gives? Why deviate from the party line? 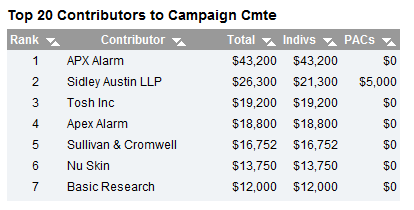 Contributor #2 really sticks out here-- a major law firm. There is some history here-- the Senator was an employee, and his father Rex is an alumnus as well and founded their Supreme Court practice.

Here's where it gets fun. From the firm's site:

Sidley has represented AT&T Inc. and its predecessors for more than a century. [...]

So when it comes to these issues, AT&T and Google have some... disagreements. There's plenty of whitepapers out by Sidley about Google's anticompetitive practices.

There's enough of a relationship here to make the claim that AT&T has a dog in this fight and has encouraged this sort of action by the Senate, most likely another skirmish in a long, drawn out proxy war between sides in the Net Neutrality fight.