Apparently, 2011 is the year of the takeover.

Companies are coming into the year with record cash levels, and the M&A activity that started to heat up during the end of 2010 seems as though it may come through into this year. Yesterday we saw ATHR bid up on the QCOM bid, and there's been some other names.

So while the focus may be on tech companies, there's another theme to watch:

There's been takeover spec for WHR, TPX, LZB, and others for a while now, and a trader is making a decently sized bet that WHR will go, very soon.

The trade is a call butterfly. This is a trade that is limited risk and limited reward. The max profit is the distance between the strikes less the debit paid-- but due to the shape it's better to consider 1/2 the max to get a good estimation of expected profit.

Let's look at the risk profile:

To max out, the stock would need to see about a 1.5 standard deviation move, which is a pretty speculative bet. There has to be some reasoning behind it and my guess is it's takeover spec.

Let's see where it has to be by feb expiry on a chart: 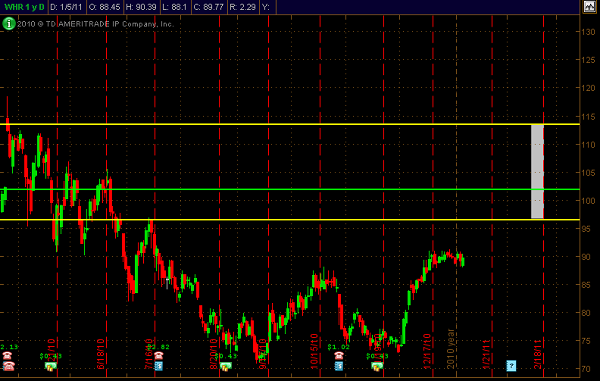 The two yellow lines are the position's breakeven by February opex. So WHR needs to appreciate by about 10% just to be profitable-- quite a move! The green line is the 1st standard deviation, which is a statistical level derived from the options implied volatility.

So for a moonshot bet, I'd take it-- it's fairly cheap, and WHR has been takeover spec in the past. I'd look for sympathy moves in similar names-- check the XHB components for housewares names.

Let's see where the stock needs to go in the next