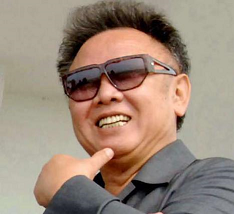 On a cold North Korean night, Kim Jong Il stood outside the veranda of one of many homes. He was pleased to see that nearly 30% of Pyonyang had electricity tonight, clearly a testament to his power. As he turned inside to try out his new Xbox Kinect, he was greeted by one of his generals.

He picked up the encrypted satellite phone and spoke to one of the ministry officials. China has been on a buying spree as of late, picking up commodity companies in Africa and storing copper in warehouses, preparing for the inevitable global inflation due to central bank actions.

Unfortunately, China stopped buying at the end of the summer, because someone let ZeroHedge through the great firewall. The idea that commodities would roll over into the end of the year would have been a boon as they could then convert more USTs to hard assets. That did not happen, and there was a strong move across the board; like many others China had missed out on the Fall rally.

So after this strong market rally, China wants to pick up some oil and copper on a "dip"-- which brings us back to the phone conversation.

The trade: a little saber-rattling and an "attack" on a South Korean island. In exchange, the North Korean people will be able to eat next month.

He hung up the phone and brought one of his generals to his side to start planning. The new Xbox Kinect would have to wait.