Yes, you heard me right. Pot-- the weed, not the company, may be a culprit in this current market correction.

As I've stated recently, intermarket volatility is something to watch. If the bond market gets stupid, the equity market will follow. And right now, we're seeing vol in commodities and municipals. The former is partly due to margin raises by the exchanges, but the absolute collapse in municipal debt is at leas partially related to that wonderful plant.

During election season, Californians were introduced to Proposition 19, which would allow for the legalization and taxation of cannabis.

Now while I'm not a user, I have no problem with people smoking weed. I'm sure you can list of reasons why it's bad, but you can apply those exact same reasons to either alcohol or tobacco. It's impossible to  overdose on cannabis, and nobody beats on their wife because they had too much to smoke.

Your Heart's in the Wrong Place!

Prop 19, however, was a legislative disaster. They were going to leave regulation up to individual cities and counties, and there were many other dumb ideas included in the bill. So while the idea may have been good in spirit, it was no surprise that Californians voted against it.

Cannabis is currently one of America's biggest cash crop, and much of it is grown in California. To give the state the ability to monetize this natural resource would certainly help their fiscal hole, and would provide current debt owners with a little more relief and stability. However, it did not come to fruition, so any future revenue the markets were pricing in had to be taken into account.

Only Price Pays for a Dimebag

So let's take a look at a chart of MUB (which has plenty of cali exposure) and a chart of the InTrade odds of Prop 19 passing: 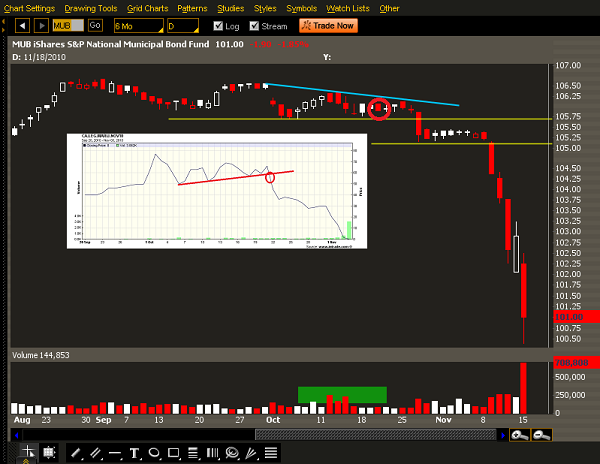 First, compare the technical patterns; a similar sort of consolidation was working its way through both markets. Second, note how the breakdown in the Intrade contract led the breakdown here-- that is because the market was not fully discounting the effect of not having this sort of added rev boost to California.

I mentioned back in November how the elections and changes in domestic policy were not a main driver in the market-- however I may be wrong, and price is certainly reflecting that.

Can their be other factors? Of course. the rate rise in treasuries certainly isn't helpful, and investors may be realizing that the chase for yield might not be the best play right here. But after that vote, the smoke cleared, and it may have pushed it over the edge.