Radware (RDWR) has been a takeover spec play for the past few weeks, so it's safe to assume that there's going to be some option plays looking to take advantage of that. Wednesday we saw a strong spike on renewed rumors of a takeout that prompted a fast move on volume to the upside. It seems that a trader was "lucky" enough to put on some long exposure before the pop.

This is a fairly bullish position, that leaves the trader with a net delta of about 180,000 -- that means it's effectively long that many shares. On a stock that traded 2M shares, that's 10% of the volume today, so it's a fairly sizeable bet.

Here's how the stock traded that day: 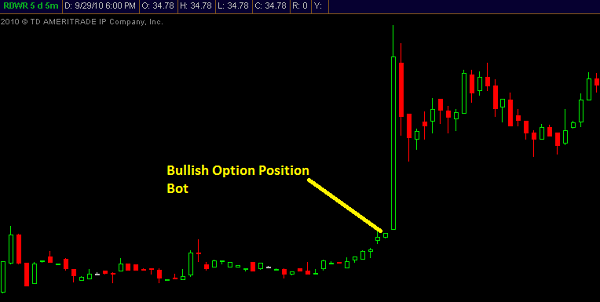 The position, assuming no hedging is looking at a gain of $190k. Not bad for someone who clearly had "luck" on their side.