Zero Hedge is out grasping at straws again. This time it is referencing supposedly bearish options activity, in the SPY 108 puts. The title of the post is "Put Buying Surges As Nobody Believes Stock Ramp Anymore, October 108 Puts Most Popular SPY Option Class Today." You can see it here.

First, you options activity alone can't be viewed as bullish or bearish. Someone could be loading up on put buys but getting long stock as well, or they could have other derivatives exposure, rolling into spreads or hedging-- the combinations are endless. There is some merit in examining the option boards, but I think better signal is found on individual stocks rather than the indexes themselves.

Second, put buying and put volume are two different things. ZH references the SPY 108 puts as being actively traded, but from what I see there is no evidence that these are being bot. Enter LiveVol: 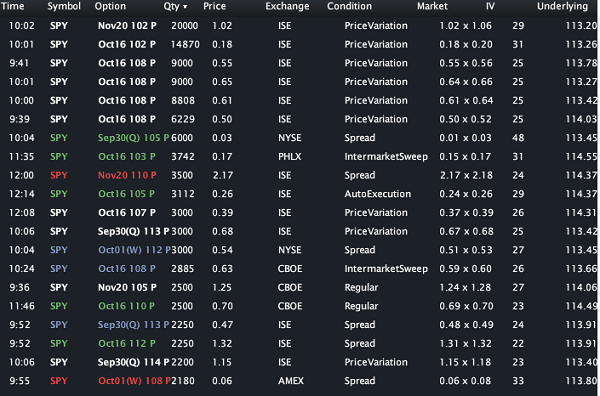 As you can see the large blocks of the Oct 108 puts traded at the mid or on the bid, so this isn't seen as aggressive buying.

Third, when have the option players been right? Over the past 3 months we've seen heavy put option activity 30 days out-- remember when everyone thought September was going to be so bearish? There's also been a steep VIX curve as traders have constantly expected volatility to pick up into the fall. This bet has been dead wrong for the entire month. Whether it is wrong in October remains to be seen, but this headline just seems to be an example of confirmation bias.