The economic reports of the past few months are painting an interesting narrative. First, we look at the unemployment picture, and it's pretty dire:

Next, we have the price performance of treasuries and "safe" corporate debt: 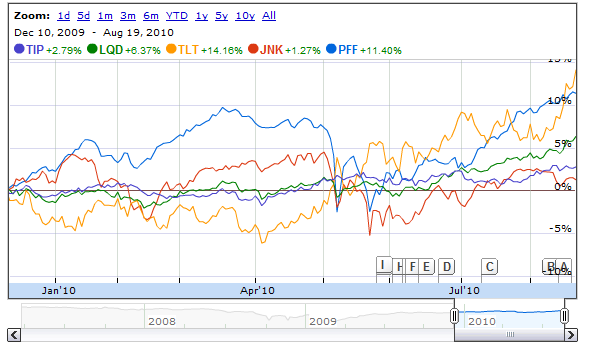 We're starting to see bond issuance at silly levels. Longer dated treasuries are being propped up by the Fed, which is keeping interest rates at Japan-esque levels. On top of that we see things like IBM issue a $1.5 billion 3-year note to yield 1.0%-- not much return available as there is such a liquidity infusion in the debt market.

We also have this chart, which shows the amount of cash held by companies is at record levels:

Non-financial companies in the Standard & Poor's 500 have a record $837 billion in cash, S&P says.

And finally, with all that cash, we are starting to see acquisitions at absurd levels. MFE was bought by INTC for a 50%+ premium; POT is receiving a hostile takeover by BHP, sending the former's stock up significantly.

So here's the narrative: there are very few places to park your cash that offer decent returns. Currency volatility not included, it is not making much sense to hold onto a ton of cash-- but companies are still doing it. And instead of hiring, there is continued cost cutting (job losses) and acquisitions that don't make much sense --unless you're the seller.

What this comes down to is cowardice. Companies are unwilling to hire or innovate because they feel there is a potentially volatile economic and political climate. Who you blame is going to depend on your political bias, but I feel that is besides the point, which is:

Companies are doing a disservice to their investors by holding onto this cash.

This isn't some complaint coming from a labor perspective; rather this is from an investor's perspective. Investing in equities is risky, and you can lose on some of your investment. If I want safety, I'll go into treasuries or purchase debt. The leadership of the private sector is not taking on the level of risk that should be in accordance to the rewards investors seek.

I don't have the answer to the problem, but I know one thing-- sitting on your hands is a positive trait for traders, not CEOs.