If I hear one more thing about the Hindenburg, I might explode (too soon?).

The purpose of this post is to show that while this technical pontification is fun to read about, there are many, many logical and statistical errors related to the Hindenburg Omen. Where to begin?

Let's start with the definition and a little history about this little tidbit. First, here are the conditions that have to be met:

Proponents of this technical signal tell us that this is a warning of a market crash. But there are some issues here. Many of these can be pulled from a book called "Evidenced Based Technical Analysis," a boring but highly recommended read.

So here are some issues I have with this:

To actually create a robust trading system, you must first have a good amount of signals on which to base this system. This system, from what I can tell, was first established in 1995 by Jim Miekka. As this is a "crash indicator," much more time is needed to see if this is a statistically valid signal because the market usually doesn't crash-- it's an abnormal market setting.

If I told you I had a foolproof moving average trading system that has worked for the past 10 years, should you subscribe to it? Probably not, especially if the moving average is something like a 23.56 day moving average. What can often happen with looking back with data is you can get sampling errors when trying to optimize the system. If that occurs, your system may underperform when doing a walk-forward sample (real time).

That's why I have issues with some of the parameters established by this system. The number of 52wk highs and 52wk lows parameter of 79 smacks a little bit of curve fitting, as does the 2.2% parameter for condition 2. 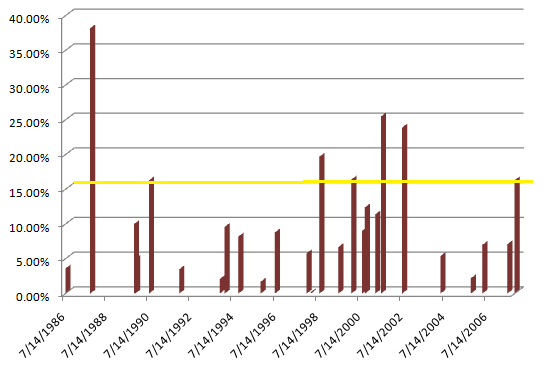 Now observe the yellow line at 15%-- that is the line that I arbitrarily drew to say that the drawdown was significant. Due to the volatility in equities, it's not uncommon to see a 5-10% correction but when we get a drawdown of >15% then investors have a right to be concerned. If you look at the clustering of signals above 15%, you can see that the majority of them come in pre-existing bear markets. So if we wanted, we could add an additional filter to the rules, having the price of the NYSE to be below the 200DMA-- that would enhance results of the signal, but it would cut the sample and we would further have issue with curve fitting bias.

The fact that we see these clusters during bear markets show that the signal is certainly affected by market environment, and there's some other statistical voodoo that can make this a much less significant signal, such as a z-test against randomly samples signals in the market.

The author of the paper goes on to explanin how certain signals were invalidated due to the Fed and "liquidity."

The main issue I have with this signal is that it is not a tradeable signal. From what I can tell, there are no exit signals or stop losses. On top of that, the paper I sourced, said that the signal foretells a market crash as soon as the following day, or 4 months afterward-- that is not acceptable! I would like to see how the signal performs on a short entry with a stop loss as well as a target or other exit signal--remember, stop loss, targets, and position sizing are also susceptible to curve fitting.

Now that I've got that out of my system

Is it a cool signal? Yes. Is it tradeable? As a system, no. Like other indicators I follow, there's no holy grail and good trading relies on a synthesis of multiple data points to generate a thesis.

Is it possible we crash next month? Sure, but are you willing to put money on that thesis?