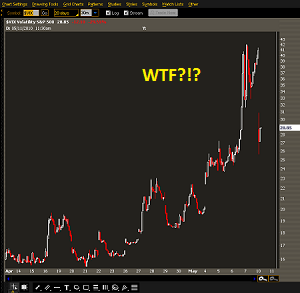 Another Monday, another gap up. Except this time it was around a 3% upside move-- more evidence of an increasingly volatile market.

Also, the VIX is seeing some tankage going on, as the traders who bought vol into the weekend Europe news are seing their premiums collapse as geopolitical uncertanity fades, at least for now.

I've had a full weekend to digest the price action and the structural risks that ocurred last week, and I've got some thoughts going into the second half of 2010.

If the market were only "worried" about the EU debt crisis, the VIX should have been around the low 30s. That was my expected target, but we blew past that and got to a reading in the low 40s. There are a few reasons for this premium blowout.

There may have been a bank that had a failed dispersion trade on. Dispersion trading is where you buy volatility in some assets and sell in others, and it works as long as the market doesn't blow out. When it does, they're forced to cover their short vol positions by buying options. When demand for options moves up, premiums move up-- and we see an increase in the VIX. Steven Sears at Barron's has a great explanation of the trade here.

I think the more important reason is that investors and traders are looking at options as a better way to manage risk in the event of structural failure. Until last week, stop losses worked well. But when the bid drops and you can't get filled, you'll have much more risk on.

So here's my thesis going into 2H10: The perceived structural market risk will increase the overall demand for options, thereby keeping premiums elevated relative to the past year. So even if we get back into a market cliamate like we saw in January, we will see a heatlhy perception of risk that has nothing to do with fundamentals or global economic conditions. This, in my opinion is fadeable and will be great for net premium sellers.