The $VXX has become the butt of many investment jokes for the first half of 2010. It's continued price drop in the face of a collapse in volatility has caused many "investors" to average in on their position, and it seems that whenever we see a slight uptick in the $VIX, there's a huge hoopla by many who nailed it. The trend, however, looks grim for longs: 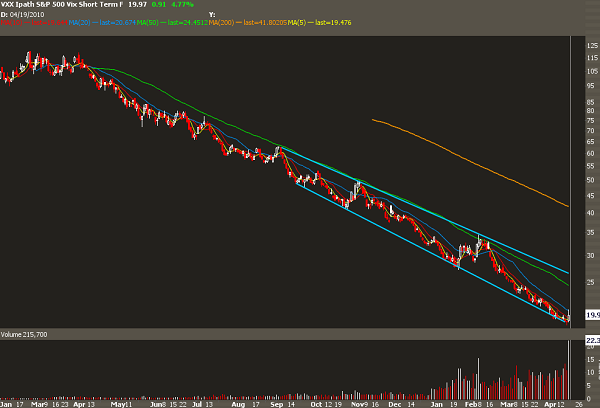 So the question is? Is the VXX doomed? Probably not, but it's going to have structural damage for a while. Why?

The VXX does not track the VIX.

The VXX gains exposure in first and second month VIX futures contracts. These contracts are not always priced the same; in fact, we've seen a fairly nice premium in these options due to how the implied volatility looks right now in the market: 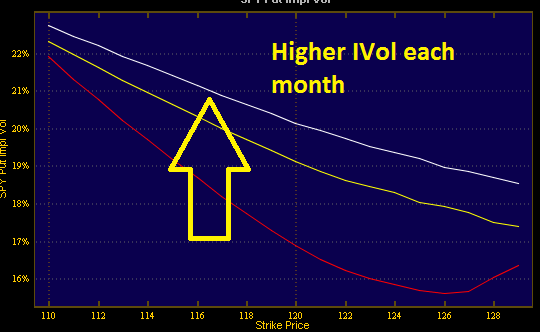 This is a chart of SPY put option implied volatility; the different colors are the months, and the further out in time, the higher the implied volatility. Investors are willing to pay a higher relative premium out in time. This is probably due to disaster imprinting from the crash of 2008.

This affects the term structure of VIX futures-- and when the futures are higher priced out in time, it hurts the performance of the VXX. Because the VXX only deals with first and second month contracts, when they have to roll their contracts, they will lose money due to the inefficiency (I think). It's very similar to what's been happening to $UNG and $USO.

The VIX futures aren't always like this-- they can actually trade at a discount, and the term structure can invert if investors will pay less premium 6 months out. So in effect the VXX can gain back those losses on these contract rolls, effectively getting a rebate. What sort of market do we need for that? Well, the trend needs to change in volatility, so you can't get around the fact that unless something structurally changes in the market, it's probably going to continue to underperform.

Think of the VXX as an amplifier of trend-- because of the contract rolls, it's much harder to find the bottom of the trend. But it will be just as difficult, if a change comes, to find a top.