I've said this before, basic technical analysis on the VIX is stupid because you can't trade it. It's a statistic and has its own underlying voodoo. However, I do keep an eye out on patterns that I feel may have an edge. We just had one today. 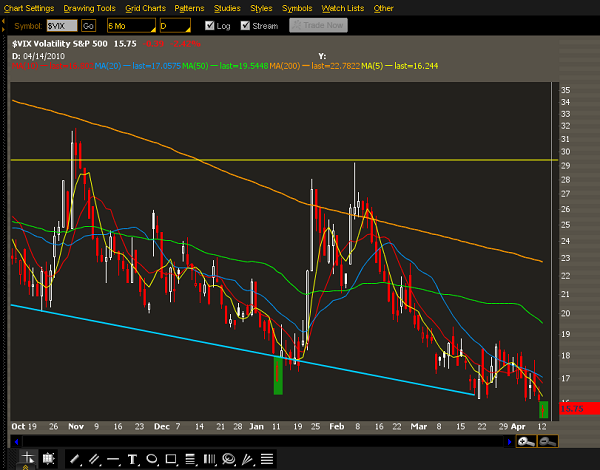 I've seen this pattern before, and it occurred back in January. We have a gap down to 52 week lows, and then a strong rally into the close. We haven't closed so I don't know if that pattern still holds; however, it did end up marking the bottom in terms of volatility.

Now the gap down on Monday wasn't because the VIX was "sold." There is a Monday effect that comes in with respect to SPX premium (and options in general), so this is actually a time in which VXX may be a better tracker of vol for the day. Also, the current realized volatility on the SPX is in single digits, so 30-day vol is still carrying a nice premium. Nevertheless, it feels like long vol is capitulating and the spread is coming in-- just add this onto the other 258 indicators that are overbought.

I mention the discrepancy between HV and IV-- well looking at HV itself, it feels that some mean reversion is in order:

As I type this, the ES has had a 4 point range for the morning session.