This has been an eventful earnings season so far for IWO-- we've taken a couple trades in GOOG (win), ISRG (scratch), and GS (loss, still open). I wanted to go ahead and breakdown what I saw with $AAPL going in.

First, on a purely sentimental observation, there was entirely too much anticipatory noise coming into this event. I observed froth from both fanboys and haters alike, so that led me to believe that everyone was expecting some huge move due to the report, both up and down.

Next, we have to consider the overall volatility environment. The rising tide in the $VIX lifts all premiums, so it definitely helped when considering what sort of trade to take.

The VIX closed friday above the 3 standard deviation bollinger band-- that's a pretty good time to look to sell some premium, and it has been on the last 4 occasions (caution: hindsight bias)!

The next data point to check out is the price action in $AAPL. While the longer term trend is up, the intermediate term trend is quite neutral.

The name has essentially been in a range since last October. We did have a "breakout", but it failed quickly-- and then we were back to our range again. My thesis was that we were not going to break support or resistance through $AAPL earnings.

Next we have the current implied volatility. IV is the premium that traders are willing to pay to protect their assets-- this premium is modeled based on the expected move over a specific time period. But when an event comes up, the premium rises as traders are concerned about a strong move either way. If we think that premium is high enough to assume the risk, then we can be net sellers. 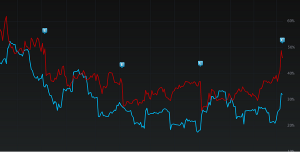 The red line is the implied volatility 30 days out. The large spike up in IV takes us to levels that we hadn't seen since April. The combination of the strong selloff and earnings anticipation caused the premiums to skyrocket.

Also, take a look at the implied volatility skew. In some option pricing models, the assumption is made that the implied volatility across the options board should remain constant-- that is not the case in reality. So the AAPL chain saw a nice volatility "smile," as higher (relative) premiums were being paid on options whose strikes were far away from the current price of AAPL. 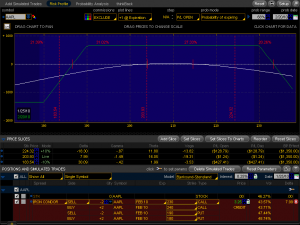 So that means we are taking in a credit of $640 to take on a risk of 1360-- we are willing to risk more than we make becuase we make money in a very wide range-- our breakeven by February expiration is between 186 and 223-- well within the range.

So this trade has turned out fairly well-- assuming that AAPL stays within that range for the next few weeks, the time decay should make it a more profitable position.

We're looking to line up a few more earnings trades, if you want in on the action, join up with IWO.