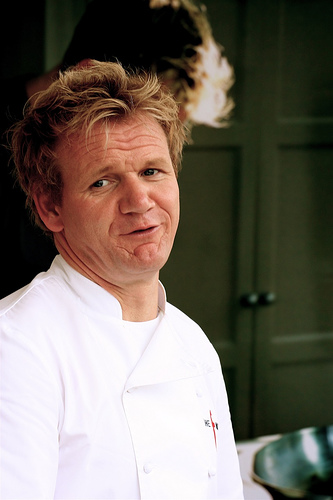 Over here in the states, Mr. Ramsay is better known for his foul-mouthed antics on "Hell's Kitchen." That's the show where he's prodded on by the U.S. producers to berate and belittle the kitchen staff all while underperforming chefs battle it out to get a job. That show sucks.

On BBC  however, he has this show called "Kitchen Nightmares," where he goes to failing restaurants as an attempt to turn them around to profitability. They provide excellent cases in management and business; it shows how he's not a jerk in real life, and actually knows what he's doing when it comes to running a restaurant.When I actually get around to watching cable, I look for shows that can make me better in a facet of my life.

As many draw parallels from sports to trading, I also see many examples of situations that he encounters over and over that also apply to trading. If you find yourself developing a trading system or style, or are looking to improve on your own, consider these ideas:

When Ramsay goes into a failing kitchen, he will almost always see an overcomplicated menu in which customers have to try and pick out of 70 items to eat. This complicates the kitchen, the waitstaff, and the customer all in one. So he goes through and removes a large portion of the items and gets it down to about 4-5 entrees.

When you're trading, how many "factors" are you using? Do they complement each other, or are they redundant? For example, if you've got a MACD and moving averages on your chart, they are telling you the same thing: where is the momentum? The same thing can be said about RSI/stochastic and a variety of other indicators.

A large swath of indicators will also hinder your true decision making process, making it much harder to pull the signal out of the noise. Think about "cutting your menu" to the information that you need that will help you gain an edge.

On "Kitchen Nightmares," there's always one person that is poison to the restaurant. Sometimes the owner, other times the chef. He often visits family owned businesses, so it's harder to fire someone, but you can clearly see who to get rid of if you want to improve the company.

Who do you need to fire? Go through your trade journal and see which trades have cost you the most money. What parameters were in the market environment as well as your mind as this trade went on? Odds are you remember these trades distinctly, and if you focus on the large losses, you'll see that there is a common theme. Sometimes it's a certain time of day, or maybe it was due to lack of sleep or sickness -- but the times in which a trader significantly underperforms, there will be something that you need to "fire."

This is the key, in my opinion. The restaurants can generally be divided into two camps: those that make shit, microwaved food, and those that have meals that are way too fancy that you can't tell the true nature of the dish.

Where are you getting your trade ideas? Are they straight out of a can, spoon fed to you from some canned newsletter or forum? Or are your "ingredients" coming from overly sophisticated models that don't historically provide an edge-- or are you picking up so many ideas that it just matches the market and you don't know where your edge lies? A significant amount of your edge will come through trade ideas that are fresh and well planned out.

How about your execution? Do you have so many pots on the stove that you can't seem to plan out a meal? You might need to cut the number of trades you have on. Does your cooking not fit in with what the customer (market) expectations are? Then you may need to redefine your menu, if only for a season.

If you liked this post and it made you hungry for profits and sheperd's pie, retweet it!