Thought I'd focus in on a single asset class to show you exactly what I'm thinking when I'm analyzing equities, commodities, and options.

A little quick macro: generally, oil is thought of to be an indicator of global growth and reflation. It also is correlated to dollar weakness and liquidity into risk assets. Those factors over the past year have more or less held up with the price action in oil.

Now considering what to use to track oil, I'm going to be using USO. USO is an etf that invests in front month oil contracts, normally light sweet crude. This is not the most effective way to track oil, but I am using it due to its convenience as well as some other features I will discuss later.

On the longer term scale, we've had a significant corrective move since prices last spiked back in the summer of 2008. We're still a long way from any sort of significant LT fibonacci retracement -- the 38.2 from the highs in July to the lows in March is at 60.

The daily trend is more neutral right now. We've had a significant trendline break (marked in blue) that was also mirrored in crude futures. After failing to break above 38/shr, USO has developed a trading range between 38 and 32. From the most recent pullback in risk assets, the etf retraced about a third of its move and found support there. If that level holds and we break above 38, then that would be the resumption of the daily uptrend and would put more momentum back into the market.

Other than fundamental reasons, there was a huge pairs trade on-- short natural gas, and long oil. That trade has been unwinding over the past few months and is part of the source of supply on the oil market.

Next, let's look at OVX. OVX measures the demand for USO options. It can show us exactly what the market is looking for in terms of overall price movement over about a month.

OVX generally runs inverse to USO. If traders become more fearful and they believe they need to protect themselves against perceived volatility, USO options will be bid up and we'll see OVX spike.

Going into 4Q09 many are expecting an increase in volatility, especially when it comes to the reflation trade. We would need to see confirmation of that with a breakout above 48 on OVX.

Another consideration when looking at the overall asset class is its running correlation with equities. Back in summer 08 when oil prices rallied, it was perceived as hurtful to the economy, and there was a negative correlation. Going into the fall that correlation strongly changed and we hopped on the Big Ass Macro Conveyor Belt (BAMCB). Correlations since then have remained elevated: 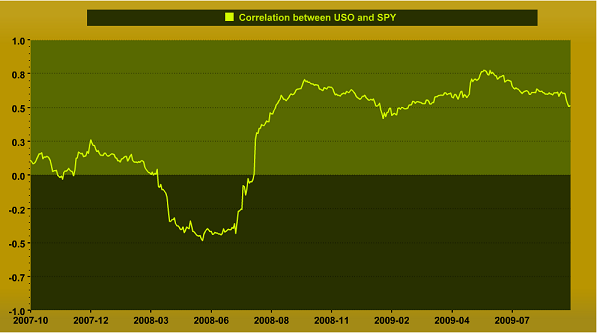 That correlation has started to pullback: as equities have rallied, oil has not followed suit. This throws a kink in the overall reflation/global growth thesis as defined by the BAMCB.

So my forecast? For me personally, it's wait and see, I wanted to put my research out there to show exactly what I'm waiting for. We're more neutral than anything, but due to the seasonality coming up I'm expecting a break either way. I'm looking for correlations to continue to wind down, and there's a potential trade available with long oil short equities.

In terms of option plays, you could continue to fade volatility both ways, either using a collar trading strategy, trading directionally, or trading straddles. There's plenty of opportunities coming up in the next few months, and I'm ready to capitalize on them.