I've been off the blogging grid for a while (although quite active on stocktwits) as I've been working hard on Options Bootcamp-- so to help to atone for my internet sins, I give you 5 OptionTrades for the Week.

First up let's have a look at WFC.

Now since this is a financial we need to analyze the sector as well. Remember for this most recent rally, the financial sector led the market higher and late last week as the market was making higher highs, the finnies were not. So I personally have a bearish bias on the financials for the short term. So while we can expect a potential move lower, I don't think WFC will move as fast as the option market is pricing in. So that means I want to get short volatility either here or on a pullback, and it's going to depend on your risk tolerance and trading style. So here's the first play:

This play is buying a lot of WFC at market and then getting short an ITM call. So you're expecting that at expiration you will get called away in stock and you keep the extrinsic from the contract you sold. Here's the risk profile:

At the close on Friday, your overall basis would have been at 8.50, but due to premarket weakness (finally!) you should be able to get a better fill price. Provided the financials pull back further, you can get a much better entry. Your max reward by at July Expiration is 1.50, so your return on basis is 17.6%, or 35% if you are using a margined account.

The options are giving us a 60% chance of success. So that means that the options board is showing a 2/5 chance that by July WFC will expire below 8.50. I know we're in a bear market, but I think that's a little extreme given the current market conditions.

Now since the chart for WFC does look a little toppy, you might want to wait for a good pullback. There's no reason to be in a hurry to get long in the name, and if we do pullback further, it's not like the implied volatility will go away anytime soon.

The next two trades are a little more speculative as we're buying call options so we're looking for a nice fast move in the markets, similar to the WFR trade I called out sometime last week.

The first one is in VMW.

We have this nice channel going on and it looks like on any bit of strength that it could break the upside resistance and move higher. Now this is a momentum play so we're going to want to manage our risk as it can snap back in that channel at any time. So we want to see a breakout above the resistance before we initiate any position, and I'd say a very worst case stop would be below the 50 day moving average. So here's the trade:

Now position sizing is very important and you should figure that out on your own; what I'm expecting on a break is a nice runup to about the 200 day moving average and possibly to thirty. Along the way during the run, I'll want to be rolling contracts with a play similar to this:

So I'll be selling my current position and buying 2x the next strike out. From there I'll go into April and sell the 30 calls on at least half to pick up some time decay on the pullback. What that does is I keep my overall delta exposure but I take some profits off the top and collect some time decay.

Now like I said before, I want to see a break of the trendline first. It's currently in an oversold state and it could go back into the channel, so it's best to remain disciplined on this trade.

Another similar call-buying-momentum-play is in ACI. I'd been in and out of this play last week and I've currently got a long position with this play:

If you check the prices you can see that I'm currently operating at a loss, but that's OK for now, if the stock drops below 14 then that is my worst case out. We've got some decent techincals on it right now-- it broke out of a multimonth downtrend and is seeing a lot of volume coming in. It's flirting with the trendline right now so I'm a little hestiant on the trade.

Here's one thing to note: on March 26th, about 30k contracts were traded on the 15 call option on the ask-- that means there are some speculators out there with deep pockets, and they'll make money if the stock breaks above 16.20 by expiration.

So I don't sound too bullish (I'm not) my next two trades are neutral and bearish. The first one is in OIH. The etf has traded between 87 and 65 since November. That's a pretty nice range. Here's the trade:

So you're risking $372 to get  $128. Sounds like a terrible trade, right? Well, the statistical odds of success that the options board is pricing in is over 70%%. And it puts your breakeven at 86 and 58. Here's where that is on the chart:

I think oil stocks are probably going to pullback further and we'll stay within this range at least until expiration. Clearly you could have received a better price on this trade (it's been mentioned before), but the thesis remains.

The last trade I have is in XRT. Retail has been a monster in this rally and I think it's getting oversold. Fortunately this ETF is right at a significant level of supply so we can manage our risk properly. 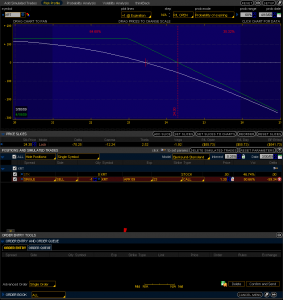 Probability of expiration is about 1/3, so you have, according to the options board, a 64% chance of being successful with this trade. You'll also pick up some nice theta with your trade if it goes with you well. Now since this trade is unlimited risk, you'll want to treat it just like shorting stock and keep a stop a couple ticks above 24.5.

If you're new to options and are looking for a good introduction, check out Options Bootcamp. It's an hour long, in-depth video going into the behavior of options. It will help you become a better trader and investor, so don't miss out!