Due to a family emergency I had to take a hiatus from blogging and commenting... I hate when I go off the grid, I feel naked.

Anyways, I'm hesitant to put on any plays until next week. This Friday we've got data coming out of Europe as well as the oh-so-important employment numbers. So the trades I'm looking at will probably be entered in next week provided I get a decent fill.

First up is USO. It has so far held support (barely) and could break sometime in the next week, but I'm still bullish for the intermediate term. In order to cap my losses if I'm wrong and to keep a small delta, I'll be looking to sell put credit spreads. 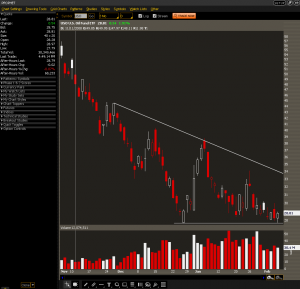 I've got some February credit spreads already put on, but you can't get the same fill due to the time decay. So I'll be looking at this play: 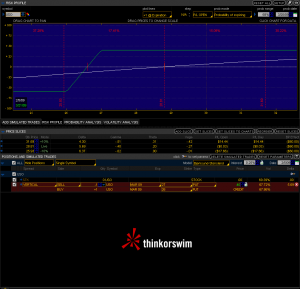 So if USO stays above about 26.5 by March 21st, it's going to be a profitable play. You're risking 6 to get 4, so that's a .66R play which is pretty good risk reward for a spread of this nature.

The best part of this spread is the initial delta. For each spread that's put on, your initial delta risk is 5-6, which means it's equivalent of owning 5 shares of USO, which would effectively putting up 140 bucks. This means that the position is not speculative at all and your risk is significantly capped.

Say the worst case happens and the low from December gets taken out very soon. At a share price of 27, your loss is about 11 bucks per spread. A little under that is where I would unwind the position as the technical basis for the play no longer exists.  So your *actual* risk for the near term is 10-12 bucks per  spread, and with a potential reward of $40, that's a 4R trade.

There's a tiny bit of volatility risk, meaning if there's an uptick in volatility for the underlying you can lose money on the contract, but I'd consider it negligible for this trade.

What do you think about this trade? Adam, I know you're watching...